Stars to Satellite - the Art and Science of Navigation 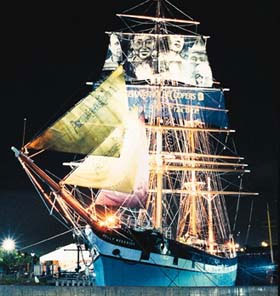 The National Trust of Australia (Victoria) will host the Stars to Satellite exhibition at Melbourne Maritime Museum - home of the Polly Woodside, from Wednesday 12th November to Friday 12th December 2003 as part of a celebration of Australia's nautical history.

The Stars to Satellite exhibition illustrates ingenuity and courage of the earliest seafarers who went to sea in a quest to discover new lands and to develop trade routes using the most basic of navigation aids to find their way. From these seafarers who used only observations of the coastline to guide them, navigation became more of a science, with navigators guided by the stars. Today, sophisticated technology means satellites can pinpoint a ship's exact position at sea utilising computers and global positioning system satellites that orbit the earth to guide cargo ships, pleasure and racing yachts safely between destinations. A far cry from the early seafarers and explorers who used more basic methods to try and discover where they were, often with notoriously unreliable results which often led to shipwrecks and death.

The Stars to Satellite exhibition explores the stories of remarkable men like Henry the Navigator and John Harrison, men of history whose passion for navigation had a significant impact on the development of navigation as a science.

Stars to Satellite showcases navigation objects such as an historic sextant owned by the Australian explorers, the Henty Brothers, and a copy of a chart drawn by Mathew Flinders, which is still the basis for many of the modern charts used by sailors today.

"This is a very important exhibition for all Victorians as there is no permanent navigation exhibition anywhere in the state," says Ann Gibson, National Trust spokeswoman. "It is an opportunity for people from all walks of life to learn about the art and science that enabled Australia to be discovered and explored".

The Melbourne Maritime Museum - home of the Polly Woodside is open daily throughout the exhibition and visitors will be encouraged to explore the Polly Woodside and the permanent exhibits, including two unique items from the Melbourne Maritime Museum's collection - the celestial and terrestrial globes. The Museum café is open for lunch and refreshments.

The Exhibition will run to Friday 12th December 2003 open from 10am to 4pm daily. Entrance INCLUDING THE EXHIBTION is $10 adults, $8 concession, $6 children (children under five free) and $30 family.

The Melbourne Maritime Museum - home of the Polly Woodside is located at South Wharf Road, Southbank 3006