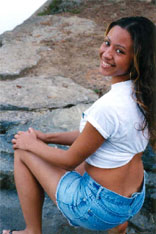 At only 16 year old, this young beauty is already a singer, model, and owner of a promotional company, known as "Urban Mix". With an upcoming demo and grand opening of her official site once again, this female knows what she wants and is determined to become a star. Not only does she major in vocals as a minor soprano, but she also considers herself as a producer for R&B tunes. Spending some time with Melina truly expressed how much energy and hard work she places on all her activities, just to become an ultimate professional With strong influences from the late Aaliyah and Tejano singer Selena, Melina hopes to create a new legacy where her music will capture her essence into the hearts of listeners.
Interview: