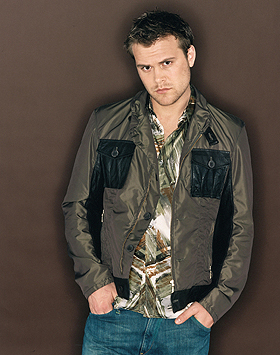 New Zealand born Music stud, Daniel Bedingfield, has got through it! Making his way through the cutthroat world of music, Bedingfield has hit the big time. After his spectacularly successful hit "Gotta Get Thru This", many thought Bedingfield would be a one-hit wonder. But he proved those doubtful, wrong, marching on forward to complete his debut album, due for release September 23rd, 2002. Described as a prolific writer, he has produced an album befitting of someone so diverse.

Read on in our candid interview with Daniel about the phenomenon of his success, how he got the girls and his love of streaking...

Femail: The song "Gotta Get Thru This" was a great success. Do you think it was a nice way of introducing Daniel Bedingfield to the music world?

Femail: You received quite a few knock-backs before you landed a recording deal, how difficult was this time for you?

Daniel: It's really hard to get your foot in the door, no one wants to listen to an unsigned artist.

Femail: Was there ever a moment when you contemplated throwing in the towel?

Femail: Your debut album is a real eclectic mix - do you find it hard to narrow your music to one genre only?

Daniel: I find it absolutely impossible!

Femail: How do you find being based in the UK? Has this helped or sometimes hindered your music career?

Daniel: It has totally helped but if I want to break into the US, I will need to spend a lot of time there.

Femail: So do you think moving to the UK or the States is essential for artists in order for them to get a break?

Daniel: Well there have been a number of artists who have had to do so in order to get anywhere.

Femail: Has the UK market influenced your music at all?

Daniel: Of course especially with bands like the Beatles, Sting, garage music and drum 'n bass.

Femail: You penned your first song at age six, what does a six-year-old write about?

Femail: Apart from your love of music, you've also worked with street children in South America - how did you find this experience?

Daniel: I found the whole experience to be challenging, uplifting, discouraging and it really puts life into perspective.

Femail: Stylistically "James Dean (I Wanna Know)" is quite different to your first single. Do you like experimenting with different sounds and melodies?

Daniel: I love it! My album is maddeningly diverse.

Femail: Was the move away from the UK Garage sound an intentional thing?

Daniel: I didn't move away from anything. Although "Gotta Get Thru This" was the first song everyone heard, it was one of the only garage songs I made.

Femail: What prompted the title "James Dean (I Wanna Know)"?

Daniel: Well I could be James Dean, but if she can't seem to notice me, then what's it worth?

Femail: You wrote and co-produced your debut album, do you feel you work best alone or with others?

Daniel: I work well both ways but I just wanted to do this one myself.

Femail: Do you have any plans to start your own label?

Femail: You mention in your bio that you now have to behave in public places - "...why should I behave in a public place? And now I have to..."
If you weren't behaving, what would you be doing?

Daniel: I'd be singing loudly, having water fights and streaking! (laughs)

Femail: Who are the four women who inspired the music on your album?

DANIEL IN THE HOT SEAT:

Describe your perfect date: With a woman.
What makes you laugh? Women
What makes you cry? Women
Who's your best friend? Natalie Portman - maybe one day!
Are you a Pub, Bar or Club kind of guy? Bar
What is your ideal day? New Zealand, beach, sun.
What is your dream car? New mini cooper!
Can you tell us 5 things required for a happy healthy & enjoyable life?
- Time off (never get any!)
- Rewarding, fulfilling occupation (I don't work)
- Soul Mate (hopefully)
- Kids (Eventually)
- An active spiritual life

What do you like to do when you're all alone? Sleep nowadays