John Aiken The Love Letter is Alive and Well Interview John Aiken The Love Letter is Alive and Well Interview

Writing down your feelings by hand can help resolve arguments, strengthen your relationships and could even score you a date, reveals a survey.

The survey of more than 1260 Australians, conducted in time for Valentine's Day by online dating site RSVP and Pilot Pen Australia, reveals that 85 per cent of people say that writing down their feelings helps them feel clearer and calmer with 55 per cent saying it helped them kiss and make up after an argument.

'Taking the time to reflect inwardly and then picking up a pen to write your feelings down can be incredibly powerful for yourself and your relationships, helping you move through difficulties onto better times," said Mr John Aiken, psychologist and dating and relationship expert.

Despite the increasing use of communication via technology, 80 per cent of survey respondents said that they had hand written a love letter and an overwhelming 90 per cent said they believed there was still a place for the love letter today. This trend also extends to the most romantic day of the year, with 77 per cent of people saying they write and send cards on Valentine's Day.

'It seems pen power still has an important place when it comes to expressing love and appreciation, which in this day and age, is heart-warming to see," says Aiken.

'We have seen a 200 per cent increase in sales of our prestige range of fountain pens & inks in the last twelve months. Research reveals this is part of a global trend which suggests an increasing need to communicate beyond the keyboard as part of a general backlash against technology," she said.

'The resurgence in pen sales, together with the RSVP/Pilot Pen survey results, certainly suggests that the love letter is alive and well!" she said.

John Aiken said that the beauty of a hand written love letter is that it can be kept and cherished to maintain long lasting, heart-warming memories of your love that can be re-visited for many years to come.

An overwhelming 83 per cent of survey respondents said that a hand written invitation would be the most romantic way to be asked out on a date, compared to a text message (15 per cent). 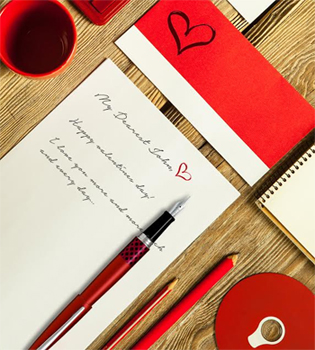 'It may seem that everyone is using emojis and gifs to communicate their feelings today, but if you really want to win someone over, the key may be putting down the phone and picking up a pen," Dave Heysen CEO of RSVP explained.

'The adage rings true when it comes to love – the pen is mightier than the sword, or the text," he adds.

When it comes to Valentine's Day, it seems that many Aussies are romantics at heart: 75 per cent of respondents said they buy their partner a Valentine's present when in a relationship. Flowers are the most preferred gift (35 per cent), followed by dinner for two (22 per cent). The most romantic gift was considered to be a surprise weekend away (41 per cent) followed by a beautiful hand written love letter (28 per cent).

'It's great to see that so many people still love to celebrate Valentine's Day - it can be a great opportunity to make a romantic gesture that can keep the connection going between you and your partner, or demonstrate your feelings towards a potential partner," says John Aiken.

When asked what is the most important factor in building and maintaining a great relationship, communication came out tops (62 per cent), followed by trust (25 per cent), with romance ranking at just 4 per cent.

'Communication is essential for a great relationship and from here, everything follows, including romance. This Valentine's Day, it might be worth picking up a pen and expressing how much you care – you never know where it might lead," added Aiken.

If you would like to write a love letter but are afraid of making a mistake, then opt for a Frixion pen which contains erasable ink.

'You can rub it out and start again and your loved one will never know you made a mistake!" said Barbara Oliver.

Question: Are you surprised by the recent Pilot Pens survey?

John Aiken: Very pleasantly surprised! It's great to know that in today's digital age of fast, short, impersonal communication, people still value hand written cards and letters! The power of the pen is not dead! 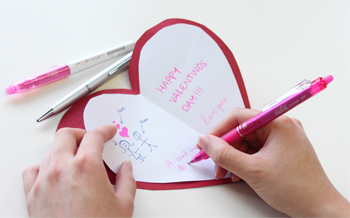 Question: What advice do you have for writing love letters and Valentine's Day cards?

John Aiken: Keep things simple and honest. Express how you feel, what you value and admire about your partner, and the things you're looking forward to doing together in 2017!


Question: How important is Valentine's Day, this year?

John Aiken: It's a great day to have fun, prioritise your partner and show some romance. If you're single, it's a really good time to get out of your comfort zone and ask someone out!


Question: How can we take our love letter into the new age?

John Aiken: Use letters, cards and small notes to tell you partner on a regular basis how much you value them. It's meaningful and it shows you care.


Question: Why is communication so important to the longevity of relationships?

John Aiken: Good communication allows for couples to bring up issues and work through them as a team. It promotes good will and friendship, and encourages couples to constantly connect and share the load.


Question: How can something as simple as a love letter keep the romance alive?

John Aiken: A love letter keeps the romance alive by expressing how you feel in a thoughtful and loving way. This is something that can be kept and referred back to for many years to come to keep the connection alive.


Question: Why do you think it's still a great idea for couples to celebrate Valentine's Day?

John Aiken: Valentine's Day is great for couples to celebrate because it gives them a chance to spend quality time together, to be romantic and to have fun.