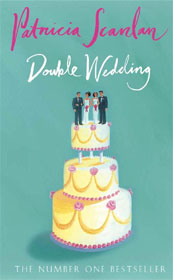 Patricia Scanlan has just knocked Dan Brown off the bestseller lists in Ireland where she also outsells Marion Keyes!

Oh no! Jessica Kennedy's stomach lurched as she gazed at her friend with undisguised dismay. A double wedding with Carol and Gary was the last thing she wanted'

Jessie and Mike's dream of a perfect wedding day seemed to be speeding out of sight as Carol and Gary's gate crashing plans progressed. With Gary's commitment problems and Carol's dysfunctional family, suddenly the dream wedding looked destined to become the wedding from hell. And they were still months away from the actual day. Could Jessie and Carol's friendship survive the next few months, and more importantly, could Jessie and Mike's engagement last the next few months? Not to mention Carol and Gary.....

Patricia Scanlan was born in Dublin, where she still lives. Her previous bestsellers include CITY GIRL, FINISHING TOUCHES, FRANCESCA'S PARTY and TWO FOR JOY. She is the series editor and a contributing author to the Open Door series. She also teaches creative writing to teenagers in her old school and is involved in Adult Literacy.