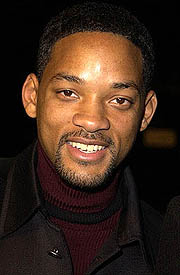 Hollywood actor WILL SMITH is at the height of his acting career, following the release of "ALI" - his biggest acting challenge to date. Being asked to play the title role of Muhammad Ali one of the world's most recognizable and greatest sporting heroes of all time was always going to be a daunting task, after all, they are mighty big shoes to fill! Forty-one years after he made his sporting debut in the boxing ring, Muhammad Ali still remains a magical figure known and loved throughout the world.

In preparation for the role, Will Smith was required to undergo more than just a physical transformation, he had to enter Ali's head, BECOME Ali. And he succeeds in portraying the role convincingly in this latest film, earning him an Oscar nomination and the approval from the Champ himself.

In town last week to attend the Australian premiere of ALI, FEMAIL caught up with the charismatic and talented Will Smith where he discussed his love of Ali and the film that critics have been raving about.

FEMAIL: Over the years, there have been several films made based on the life of Muhammad Ali. Is this latest version, a warts and all portrayal?

Will: Well yes it's definitely a warts and all portrayal. When I first met with Ali, I asked him if there was something specific he wanted illuminated or were there other aspects that he thought were less important? He simply replied, "just find the truth, and tell it." So that's what Michael Mann [director] and I set out to do and I'm very happy with the outcome.

FEMAIL: Truth was a very important thing to Muhammad Ali, but sometimes his honesty landed him in hot water. He wasn't anyone's slave; he did things the way he wanted to.

Will: Yes and it's amazing to me that we look at Muhammad Ali's stance and we say "wow that's amazing that's really great, that he was able to do that" and it's sort of bittersweet for me, working on this film because that's actually very sad you know.

Muhammad Ali said [in character] "I'm not going to fly ten thousand miles to kill strangers. You know, that should not be a difficult thing to stand up for. I don't have any qualms with the Viet Kong, I never even heard of the Viet Kong, until you said it to me, no I'm not going to fly ten thousand miles and try to kill other poor people." It's a very simple concept and we all say "wow that's amazing". It's simple, but it is not easy.

FEMAIL: Is Muhammad Ali satisfied with the finished project?

Will: His family was involved from day one, through all the incarnations of the script, Ali and his wife Lonnie, all of his children, everyone has been completely involved with the whole process. When I turned the film down for four or five years I saw Ali between that time. I saw him two weeks after I turned the movie down and he said, "You ain't pretty enough to play me anyway!" And I said, "you know Champ, it's just respect for your legacy and your family. And I just don't want to be the dude that makes a horrible movie about your life!" He replied, "Yeah don't do that I already did that!" (laughs)

He told me to consider it and keep thinking about it and then a few years later when I took the film, he called and said, "I know you're going to do a good job, don't worry about it". I sat behind him at the premiere and he kept turning around during the movie and saying, "Damn your good boy!" His daughter actually gave me the ultimate compliment after she watched the film. She said, "ten minutes into the film I forgot I wasn't watching Daddy!" And I was like OK, that's it, that's it, game over, it's a wrap, it doesn't get any better than that! (grins) 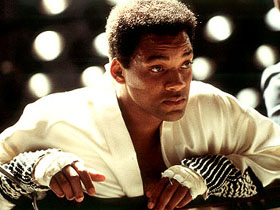 FEMAIL: From the Fresh Prince of Bel Air to "Ali", how does that journey happen?

Will: Well that was part of the reason why I turned the film down for about five years. I couldn't see the road from the Fresh Prince of Bel Air to "Ali" and Michael Mann was the first person to illustrate what he called the curriculum of becoming Muhammad Ali. He laid out what the days would be like; he laid out the food that I was going to eat. He laid out the process of becoming Muhammad Ali physically and how that physical process would naturally lead to a comprehension of the mental and emotional position that Muhammad Ali lived in and how that mental and emotional space would automatically help me understand the necessity for the spiritual strength. He was the first person that essentially laid it out mathematically, the equation for becoming Muhammad Ali and that excited me.

FEMAIL: Did you ever allow yourself to dream and think that I am going to do all these movies, get nominated for an Oscar did you ever anticipate that it might turn out like this?

FEMAIL: So when did you start to dream as an actor and what sparked that transformation?

Will: "Ali" is really the first time that I started to dream as an actor. Even with 'Independence Day', 'Men In Black', 'Bad Boys' - those films were really lending themselves to the same persona that I created with the 'Fresh Prince of Bel Air' and with my music, it was still blending itself. It was almost an extension of that persona and "Ali" is a real break completely from anything that I had ever performed or any character that I had lived before. So this is really the first time that I am viewing myself totally as an actor.

FEMAIL: When you first stepped into a boxing ring, your wife Jada wasn't totally convinced that you could pull it off, saying "he is very clumsy ... he is not the most coordinated guy. I was very concerned." Were you also worried at first that you may not be able to pull off the role convincingly?

Will: I'm one of those people that believes in numbers, I believe in math, so if I'm very clumsy and very sloppy today, there is an amount of time that I won't be clumsy and I won't be sloppy. If you do something every day, you're going to get better. My concern was that I needed time, I needed 37 years (chuckles) to prepare for this role and really my concern was the temple with which I could get better. Michael Mann found Darryl Foster who trained with Sugar Ray Leonard and Angelo Dundee came in who actually trained Ali, so with that team I felt very confident that I would make as quick a rise and get my sea legs in the ring as quickly as humanly possible.

FEMAIL: What do you make of the criticism that the film doesn't teach us enough about the inner Ali?

Will: Any time you create a film someone is going to find something that they don't like about it or something that they are uncomfortable with. I think that Michael Mann has created a masterpiece that will stand the test of time and we can look at the 200 or so films that were created this year and we'll talk about it in 10 years.