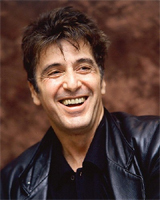 Pacino, who earned an Oscar for his starring role in "Scent of a Woman" and was nominated eight times, also earned two Tony Awards, for his roles in "Does the Tiger Wear a Necktie?" and "The Education of Pavlo Hummel." Among his iconic characters are the part of Michael Corleone in the Godfather trilogy, as well as unforgettable performances in such films as "Dog Day Afternoon," "Donnie Brasco," "Glengarry Glen Ross," "Scarface" and "Serpico." In 2005 Pacino was honored with the American Film Institute's Lifetime Achievement Award.