Will Smith I Robot 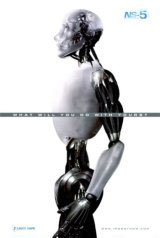 Will Smith/I, Robot Interview by Paul Fischer in Los Angeles.

At the conclusion of the new Will Smith movie I, Robot, a fellow audience member was heard to remark: 'That Will Smith is such a personable young actor'. The next day, the casually attired movie star says that he is more than comfortable with that particular persona. "You know what? People are my energy. I am one of those kinds of guys where I just can't function if somebody is uncomfortable in the room, or if somebody is pissed off. It is oppressive to me, so it is always important for me to keep the energy good, keep it going and keep it happy, if only for selfish reasons. But also, people enjoy being able to laugh and feeling comfortable, so it is important to me to keep that energy alive." Smith has always been press-friendly. His loud, boisterous voice booms with a genuine and consistent energy. Always affable, nothing seems to faze the actor, even when faced with a recent tabloid tale of his so-called $1.8m trailer. Smith eyes the splashy story and begins to laugh. "You are starting with that? That is terrible and a million dollars exaggerated," Will insists, continuing to laugh loudly. The actor says that such stories are typically fabricated. "People couldn't possible imagine that somebody could make something up like that as we see stuff all the time - especially in New York. When you are there, you read stuff in the paper all the time." He then cites a recent example of fictionalized journalism, when he was supposedly spotted at a recent Prince concert, "and I couldn't get in because I wanted my crew in and the tickets were $100 a piece, so I said 'I am not payin' to see this concert,' and I left. The truth was, I was in bed asleep when it supposedly happened. People just could not possibly imagine that they made up EVERYTHING..."

Yet, for the former TV star-turned movie megastar, it is all part and parcel of fame, yet Smith's attitude to the tabloid media, is "you just gotta ignore it."

These days, however, Smith is having a blast who, at 35, is still able to blow things up and shoot things down, such as a bunch of robots, both real and imagined, in this loose adaptation of Isaac Asimov's collection of stories, I, Robot. No stranger to doing battle with sci-fi creatures from the Men in Black franchise, Smith says that on I Robot, the process of dealing with a lot of CGI robots was simpler than in his MIB days. "The process was somewhat easier because technology has grown to the point where now they can actually use a person. So they had the guys in green suits, which meant being able to play the scene with a person actually gives a real organic texture to it versus looking at a tennis ball." Smith had been attached to I, Robot, ever since Australian director Alex Proyas was able to get this pet project off the ground. The actor said his attraction to the film had less to do with feeling an affinity for his anti-technology character, futuristic cop Del Spooner, but to the "concept that Alex wanted to create." That was, adds Smith, "a small art film filled in the wrappings of a summer blockbuster." By that he means, that he sees this I, Robot as a part action blockbuster and part character study, referring to one pivotal moment, a lengthy interrogation scene between Smith's Spooner and Sonny, a robot accused of murder. "That scene is a six minute scene and Alex just takes his time with it. You just wouldn't normally take that kind of time in a summer blockbuster, to have a movie where your hero cries about a little girl being killed by a robot. I loved the challenge of being able to make a movie with that kind of texture and depth and be able to put it out in July."

Smith says that Spooner is the antithesis of the actor. "This was the first time I have ever played a character that was that troubled. This is a dude that walks around every day unhappy, which is not me at all, because I am tickled pink," he says laughingly, "Tickled pink" may be the perfection description of Will Smith. After all, he is on top of Hollywood's A-list, and has a successful marriage to actress Jada Pinkett. Smith says that balancing family and career has always been his priority. "First and foremost, just like in my house when I was growing up, I knew that my mother was the centre, in that mommy has to be taken care of first and if mommy is straight, then everybody else will be straight. So at home, I am very clear that Jada's physical, mental, spiritual health and comfort come first and foremost, and then everything else comes from the garden. So for me it is very important to keep my garden watered, and healthy," adds Smith, trying hard to maintain a straight face. "Everything else will come from there."

As for his nude scene in I, Robot, Smith says that Jada doesn't mind if women [and some men], manage to gasp and cheer at the sight of his on-screen pectorals. "Let me tell you, Jada loves that. She says all the time that 'no woman wants a man that another woman don't want.' So she is very comfortable." Even though the couple is producing a TV sitcom, Smith confesses that they rarely watch TV at all any more. Instead, he says laughingly, "we just have lots of sex."

While Smith says that it is his acting that pays the bills, he still loves making music. "I have an album coming for Christmas, which I haven't compiled yet, but I have about 40 songs so far. The technology of making music today is ridiculous. I just programmed the music, laid the vocals, mixed the record and burned a CD on my laptop in my hotel room. I am like 'Wow!' that it has come to a point with technology that I was mixing a song with my headphones on the plane flying back here." Smith says that he sees parallels between his up-and-coming album and I, Robot. "It is the same type of blockbuster zone, but slightly more mature, and more elevated intellectually. That is sort of where my music is now, but still fun."...

If the music takes off, Smith may give up the acting - well at least a certain type of movie. "I feel like I have got five or six more years of action movies and blowing stuff up. I probably want to hurry up and get those while I can still take my shirt off in a movie," he adds smilingly. After that, he says there is a vanity project he is yearning to do. "When we were in Mozambique shooting "Ali", I was really taken by the similarities in the music, which was so drastically different, but there is a real basis that connects to rhythm and movement. So for probably about 20 years I have dreamed about doing an album maybe entitled The World According To Hip Hop that would be an exploration of world music through the eyes of hip hop producers. I just haven't has the chance to have the 7 or 8 months free to be able to travel to different places and record for two weeks and go around the world."

Meanwhile, Will has some other movies coming out, including the new comedy The Last First Kiss and the animated comedy Shark's tale. But there is no Men in Black 3 in Smith's immediate future. "It just has to be right. I feel like "I, Robot" really raises the bar for me for that genre, so there has to be those other levels. Not that you can't have fun, but there is something about "I, Robot"....

I, ROBOT OPENS ON JULY