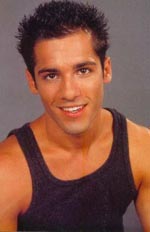 Talking to Alex Dimitriades, it is easy to see why this talented young actor is making his mark on the Australian film and television industry. Confident yet modest, charismatic yet mysterious, there is more to Alex than first meets the eye.

Coming to our attention in the fine Australian film 'Heartbreak Kid' opposite actress Claudia Karvan, Alex's film and television career continues to flourish. Having had lead roles in Wildside, GP, Blue Murder, Heartbreak High and probably his most confronting film to date - Head On, Alex is on our screens once again in the role of Danny D'Amato, a man who is on a mission to help bring fugitive businessman Christopher Skase to justice.

In this frank interview, Alex chatted to Femail about life, his role models and his latest film project, the very funny "Let's Get Skase".


Femail: What has been your favourite performance/film project to date?

Alex: The Heartbreak Kid because it was the first film I had ever been involved in and it was fresh. I was also naive to the whole acting/film thing, so there is always something special to that.

Femail: Heartbreak Kid and the series Heartbreak High sparked the beginning of your acting career. Do you have fond memories of the time you spent working on these projects?

Alex: Yes, I needed to come down to Melbourne, which was a first for me and so I was in another world literally. Melbourne had a different rhythm to Sydney so that took some getting used to. I was 17 or 18 and I hadn't really traveled much at all and then all of a sudden I spent three months in Melbourne. I was also working on something, which was beyond my wildest dreams so I definitely have really fond memories.

Femail: Before joining Heartbreak Kid did you have any illusions about what the acting profession might be like?

Alex: No not really, I never thought about those sorts of things. When I used to watch movies I'd look at it for what it was and kind of mimicked people from certain films. There is a level of responsibility and pressure upon you once you need to go out and do it for yourself. You need to be reliant on your own acting skills to translate a script into real life.

Femail: Growing up, did you always have your sights set on acting or was it just a career you fell in to?

Alex: It was something I fell into, it's a fantasyland to be involved in, and it is so unreal. I never imagined it would be a reality for me, none of us (family) ever knew anyone in the industry. But when it happened, I thought, well it's just as well as I really should have been doing this all along! (laughs) In a way I'm glad I wasn't involved in acting earlier as I was young enough already when I got my break in Heartbreak Kid.

Femail: Given your European background, do you find you tend to get offered stereotypical roles?

Alex: Sometimes I do and sometimes not, every now and then I get offered different roles.

Femail: So as an actor, you don't feel pigeon holed at all?

Alex: No, I think that happens less and less the longer you go on as more people have confidence in you and open up to you. Sometimes stereotyping can work in your favour, like comedy.

Femail: What qualities do you look for when deciding on your next film/television projects?

Alex: It's really instinctive, my gut reaction is the most important thing, some things might not spark immediately and certain things grow on you.

Femail: Have you done any work overseas and is this something you are considering focusing on in the immediate future?

Alex: No my relationship is releasing local films and building upon my reputation here and hopefully being known as a "good actor".

Femail: Your new film "Let's Get Skase" is packed with action and humour. How much fun did you have making this film?

Alex: Too much fun, it got out of hand! The cast and crew were a bunch of fun guys and it was a very, very blokey film set therefore there was lots of raucous humour; some of it below the belt! (laughing cheekily) However I got to work with a very intelligent group of actors and a talented director.

Femail: Did the cast and crew get up to any antics while filming the comedy action scenes?

Alex: In and out, onset and off, there was not a single dull moment while filming "Let's Get Skase".

Femail: What prompted you to be a part of this film?

Alex: Just the scope of the film was so large, it made me quite proud. When making the film together, the vibe was incredible giving you lots of hope and a boost and that's what the film wants to ultimately achieve.

Femail: In "Let's Get Skase" you play Danny D'Amato - a character who is very dedicated and shares a close bond with his family. Do you share the same relationship with your own family?

Alex: It goes without saying really; at the end of the day that's all you've got, that's your blood.

Femail: Have they been supportive of your acting career?

Alex: Yes, always, that comes out of love.

Femail: Who has had a major influence on your career?

Alex: Bee Smith from Prisoner! (laughs) No seriously, my sister, because she makes me laugh and I see a lot of myself in her. Also my grandmother whilst growing up.

Femail: Which do you prefer - working in film or television?

Alex: They're the same thing really, I just prefer starting on something and finishing it, knowing when it ends and not knowing what's going to happen within that time. I'd be a hypocrite if I preferred one to the other.

Femail: Are you currently working on anything at the moment?

Alex: Not at this present stage.

Femail: What is next on the cards for you?

Alex: I have another film due for release around Christmas, so I will be on the promotion circuit once again.