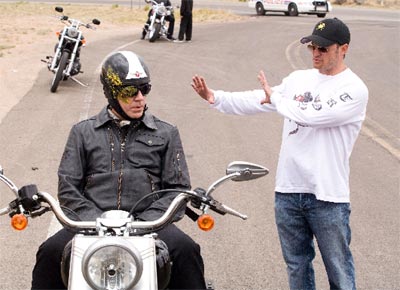 Wild Hogs is the kind of movie that has you at hello: four guys driving dangerously close to middle age decide to "get their motors running, head out on the highway, looking for adventure" on their Harley Davidson motorcycles. So far, so funny - especially as you just know they're going to get mixed up with a real biker gang. Then you find out that the four guys are played by John Travolta, Tim Allen, Martin Lawrence, and William H Macy - and that the leader of the real bikers is played by Ray Liotta. Now that's a movie you have to see, so it's no wonder it grossed over $150 million in the US and twice that worldwide. But it wasn't middle-aged men who made it one of the year's biggest comedies - it was people of all ages who, understandably, found the combination of cast, concept and comedy irresistible, as director Walt Becker explains.

The interesting thing in the demographic is that it appealed literally across the board, and I think it's because it's less of mid-life crisis movie than a life crisis movie. The humor plays to pretty much everybody, and some of these relationship issues aren't confined only to fifty year old men. And people just loved the idea of four poseurs confronting the underbelly of biker culture and having to be heroic in their own ways.

Now, directors always say the actors in the film were all their absolute first choice - I think saying that is in the Director's Guild contract or something - but in this case I think you might actually have got your dream cast.

That's totally true. I would tell you if there was someone we wanted but didn't get, but this was one of the few times where every one of my first choices we ended up getting. I just kept pitching,'What about Travolta?' and everyone said, 'Oh, you'll never get him,' and then we got him, and then Martin Lawrence, and William H Macy, and Tim Allen...


Yeah, normally you get John Travolta or Tim Allen, or Martin Lawrence -- and here you have all three in one picture.... and then you stir in William H Macy for credibility.

Maybe it was naivetĂ© on my part but I just said things like, 'Ray Liotta's the only guy who can be the biker gang leader,' because I wanted someone who was super intense and grounded to put across from those guys. I wanted to make this an event movie through the cast. I said, 'Let me put four guys on a poster where people say "I don't know what that movie's about, but I have to see it"' so that was kind of the idea, and the bonus was that they are all great actors, and the chemistry between the four of them was just great.

You're in your late thirties, but have you had a premature mid-life crisis moment yet?

I've had many, let's put it that way! My dad has had like eight. He went from Harleys to sailboats, then he wanted to be a rancher, so I kind of grew up with that. And now I've got a couple of kids, but I'm a big car guy and motorcycle guy so I always love the toys.


And talking of crises is it true that the Hell's Angels sued Disney to stop the film featuring a biker gang with their name?

Yeah! I don't know how they sniff this stuff out, but I guess they have better brand attorneys than GE!Did they lose a bit of credibility, in your eyes? I mean a biker gang with brand lawyers?Not for me, because even with that, they're still kind of the real deal, they're just protecting their brand from being made fun of I guess. So the Hell's Angels in the script become the Del Fuegos. Besides, I wouldn't want to wind up on the wrong side of the table with those guys, you know what I mean?Talking of 'the real deal', Peter Fonda from Easy Rider turns up in the movie. Talk about hog heaven…Yeah. He is the most iconic figure in motorcycle culture just from that movie. Dennis Hopper has done a bunch of things and reinvented himself, but Peter has stayed in that lifestyle. He's in a biker gang, he's still got that great thing going for him, and it's amazing to see how our biker gang responded to him.


Someone else who brings a lot to the table is John C McGinley (Scrubs), as a gay motorcycle cop who catches our boys skinny-dipping.

He's so funny, and he does so many alternative takes, he's one of the funniest most creative actors I've ever worked with.


When I was watching his scenes, I was sitting in the theatre thinking 'I can't wait to see the outtakes' on DVD. Am I going to be disappointed?

No! There's a ton of bloopers which are pretty hilarious on there. And there's a soundtrack, too, because we never got to put one out, some interactive games, and deleted scenes… It's a pretty great package.


Walt Becker describes the plot of Wild Hogs
It's a story about four friends that are kind of at a crossroads in all of their lives. Travolta's character has kind of lost everything, and he decides to talk his buddies into going on a road trip on their Harley Davidsons, and their all dealing with different crises, and find themselves along the way, and wind up getting mixed up with a real biker gang run by Ray Liotta, and through a series of events get tangled up and find themselves having to save themselves and a small town at the end of the movie.