Will Ferrell Discovers His Inner Elf 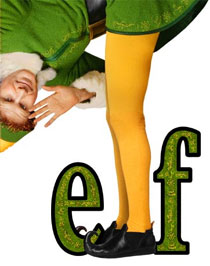 Will Ferrell/Elf Interview by Paul Fischer in New York.

Like most of us, ex-Saturday Night Live regular Will Ferrell craves recognition. Not that he would be the first to admit it, After all, who else would claim that his first major cinematic triumph was none other than A Night at the Roxbury? Yes really. "I'll have you know that's a classic", Ferrell comments, tongue entrenched in cheek. After a slew of such 'classics , including Superstar and other Saturday Night Live misadventures, Ferrell has left his old TV nest to come into his own, being touted as the next Jim Carrey. While so many regulars of Saturday Night Live have tried - and failed - to make it into mainstream Hollywood, Ferrell has stuck with it, and cheerfully admits that he hasn't as yet fallen off the face of the earth unlike so many of his contemporaries. "So far, I'm still on the earth and I make sure I eat a good breakfast every morning," he quips. "People love trying to analyse that, and I don't really know the answer. The only answer I have is that if you're able to get in on the development, able to write for yourself a little bit, it possibly increases your odds of being more successful. Even then, it's still all a crapshoot. I never expected to be on 'Saturday Night Live,' so to try to figure out what dictates success being on that is even impossible." The challenge for Ferrell, is to broaden his appeal, which is tricky given his years doing sketch comedy in front of a live audience, Even Ferrell doesn't quite know how to avoid the pitfalls of segueing from broad TV comedy to mainstream cinema. "All you have in comedy, in general, is just going with your instincts. You can only hope that other people think that what you think is funny is funny. I don't have an answer but I just try to plough straight ahead."

Yet one wonders how a show such as Saturday Night Live prepares one for a full-on acting career. Ferrell muses over the question, as if it had just occurred to him. "Saturday Night Live is such a comedy boot camp in a way, because you get to work with so many different people who come in to host the show and you get thrown into so many situations and learn how to think on your feet, so filmmaking actually feels slow, in a good way. You don't feel like you're being thrown into this high-speed game. Also, I think it allows you to be nimble in such a way that when you're working on a movie, if you have to adjust in any way, you're OK with it because you come from a background that's all about adjustments."

Like his latest, elfish character, Ferrell has adjusted to this new world of Hollywood like an elf to Christmas. Audiences will soon discover Ferrell's acting chops when they see what could be his breakthrough film in Elf, the sometimes quirky, but also sweet Xmas comedy in which he is cast as a human adopted Elf, wide eyed and pure in his innocence, who travels to New York in search of his real father, a cold publisher of children's books, [a perfectly cast James Caan] who has forgotten the true meaning of Christmas. Ferrell has to carry this very Xmas movie on his shoulders, but that's not the only reason why he was keen to do it, despite it being "a bit of a winding journey through the whole thing," getting it made. The actor says that if done the right way, he could finally have the opportunity to be in a family comedy, because "the comedies I've done were probably viewed by a very specific audience. We felt like if we could make this funny enough; it would have an opportunity to be seen by a wider audience."

That meant discovering his inner elf, by spending much of the film wearing some very colourful tights. "Wearing them was invigorating; I never felt more like a man," he says laughingly.

Ferrell laughs at the recollection of walking around New York City in an elf suit. "It was a lot of fun and in fact I used to do that growing up in high school and college, wearing crazy outfits for the day to see if anyone noticed. That was just par for the course for me, yet I was amazed at how New Yorkers would just walk right by me or refuse to make eye contact, which would then provoke me to want to give them a hug," Ferrell recalls gleefully "People became really uncomfortable or they'd yell things like: 'Nice tights.' The first day of filming was literally in the Lincoln Tunnel at seven in the morning, in that outfit, so I didn't really get to warm up to the character. I just jumped in, and there I was."

Ferrell has no need to regret departing Saturday Night Live, with his movie career going from strength to strength. He laughs when asked to react to the proposition that he may well be the next Jim Carrey, whatever that means. "I contend that it's hogwash, because I'm actually retiring."

Far from it, because like Carrey and other recent comics before him, he's about to shoot a drama. "That was more of a case where Adam Rapp, who is the writer and going to be the director of the film, had me in mind and it was his choice to talk to me. I wasn't like I read the script and said, 'Someone should give me a chance. I can do this!' We just happened to be at the same agency and he wanted to sit down and see if I would even be interested in doing something like this. So I just feel fortunate that he would think of me in that way. So, we'll see if it's something I can pull off."

Ferrell sees no distinction between comedy and drama, which is why he doesn t have much trepidation. "You always want to do a good job and hopefully, I won't be in something that looks and feels like I'm in over my head. But without really knowing, I think a lot of the instincts you have doing comedy are really the same for doing drama, in that it's essentially about listening. The way I approach comedy, is you have to commit to everything as if it's a dramatic role, meaning you play it straight."

Ferrell has also completed Anchorman, the 70s-set comedy which he co-wrote, about chauvinistic TV news anchormen, whose male world is turned upside down with the promotion of a woman to the anchor desk. "We're extremely happy and I'm so excited. The thing that's so much fun is that Anchorman will be as different as Elf was from Old School."

It appears that the world is ready for Will Ferrell at large.