Why you are Australian a Letter to my Children 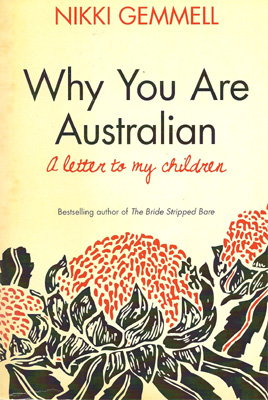 Why you are Australian A Letter to my Children

For anyone who needs reminding.

What does it mean to be Australian?

When expatriate novelist Nikki Gemmell had her children in London, she chose to give them Aussie citizenship over British.

Why You Are Australian is a treatise
about what it means to be Australian.
Honest, moving, provocative, uplifting-
an exile's story, a mother's story, an Australian's story.

From the sun and surf of the coast to the gum trees and red sands of the Centre, Australia has stayed in the writer's psyche despite her years in exile. Observing her children growing up in a crowded European metropolis, she recalls her own, much more carefree childhood. What do the children know of the land of their parents and grandparents- and are her own memoires realistic? She decides to take them on an experimental Australian journey to introduce them to her country. Her boys are moved from their private London school into a state primary on the edge of the bush- the changes, for everyone, are enormous. But can you ever go home again? With characteristic candour, Nikki Gemmell looks at what it means to be Australia- in the past and right now.

Nikki Gemmell is the author of five novels: The Bride Stripped Bare, Shiver, Cleave, Lovesong and The Book of Rapture, as well as a non-fiction work, Pleasure. Her writing has been internationally critically acclaim: in France she's been called the female Jack Kerouac; in the US she was described as one of the few truly original voice to emerge in a long time; and in Australia as one of the most unique and engaging authors of her generation.

Why you are Australian a Letter to my Children
HarperCollins Publishers Australia
Author: Nikki Gemmell
ISBN: 9780732289591
Price: $29.99