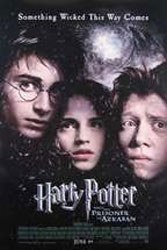 Robbie Coltrane/ Harry Potter and the Prisoner of Azkaban Interview by Paul Fischer in New York.

Robbie Coltrane may be larger-than-life, but as exhausted as he is followingthe world premiere of Harry Potter and the Prisoner of Azkaban, his sense ofhumour remains intact. "I'd forgotten how exhausting these things are," saysColtrane, referring to the whole, massive press junket process that goesalong with a Harry Potter blockbuster. "It's really like being a liar, youknow, and you have to be careful when you're a liar. You ask yourself: HaveI spoken about this to these people before, and am I going to get 40 eyesgoing: we've heard this big boy?"

Coltrane is dressed all in black, and despite our hotel setting, insists onsmoking a cigarette as we talk, initially about the blockbuster franchisethat has changed his life, professionally at least. Perhaps, he muses, hemay never have embarked on the Potter films had it not been for recentfatherhood. "I don't think I could have done Hagrid before I had mychildren, because I didn't really like children," Coltrane laughinglyconcedes. "When you're in your 20's and 30's and you don't have children,they just seem like smelly, selfish squealing little brats, which of coursethey are." But Coltrane's children, one 11 and the other 6, seem quite Well,they're quite "cool with" the notion that their dad is playing Hagrid. "Kidsare quite cool, because they don't think there's anything peculiar aboutseeing their dad on the screen as that's what their dad does, you know. Whatyou don't see till you're a parent, I suspect, and this is my own experience, is all their wonderful redeeming features."

While Coltrane says that he as grown, more as a parent than an actor, sincethe beginning of the Potter films, he marvels at the growth of the threechildren who are the leads in the films, namely Daniel Radcliffe, EmilyWatson and Rupert Grint. "Their concentration is much more casual then itused to be. They used to be kind of: Well I'm going to do somethingdifficult in 10 minutes so I'll get prepared now, whereas now they just kindof they all muck around on the set and tell jokes like old actors do.They're much more secure, and more certain of what they can do."

Coltrane knows what he is talking about. After all, the heavy-set Scottishactor has appeared in over 60 films, as well as numerous TV series,especially Cracker, which garnered him new found popularity and respect. Yetlooking back, Coltrane finds little to miss about his television days. "Idon't miss the schedules, which were just horrific, not compared with theAmerican ones, but then they get a few extra zeros on the end in their wagepackets. Also I don't miss that level of recognition you get when you're onTV," adds Coltrane. "There's a kind of terrible lack of respect from peopleif you do tele, because they think you're a part of the family, and thatit's all right to come and sit on your knee in the middle of an airport. Theworst thing about doing tele is that the people who come up to you when youdo tele are almost invariably arseholes," Coltrane adds laughingly. "Andthey are arseholes at their work, they're arseholes in the pub, they'reprobably the arsehole of the family and if you're related to them you think,oh god, here's Uncle Jim, and he's an arsehole. He will be the guy whocomes up at the airport and decides to sit down beside you and show you hismaps and binoculars and wonder why you're annoyed, you know? Whereas,everyone else in the airport recognises you but thinks, leave him alone,he's having his life."

They are, he says, different from the multitude of fans he has sinceinherited since working on the Harry Potter films. "They're not as crazy asyou'd think." Not even the children. "Their parents like to tell them who Iam, though, because they get brownie points you see," he adds with a slygrin.

When Coltrane isn't busy donning thick beards and Hagrid make up, the actorcan be seen in the series finale of Frasier, which is yet to air outside ofNorth America, where he played one of Daphne's brothers, a mumbling drunk.Coltrane considered it an honour to be a part of American televisionhistory. "It was an hour long and I was only on for two minutes," he saysmodestly. "They'd asked me to do it before and I never could, because ofother things. They're kind of fans of Cracker, they know my work and ofcourse they can have who they like, because they're such a successful show."

Coltrane is now preparing for the fourth film, and possibly the last withthe current trio of kids, but as for Coltrane, he has no idea how muchlonger he'll be working on this franchise. But he DOES know why the HarryPotter films have proven so successful as they continue to become entrenchedin our popular culture. "All great works of art are about what human beingsare really like. When I was 10, all literature was about white peopleconquering Africa and fighting the Germans. There was absolutely no kind ofpsychological insight into what was actually going on in my life." Herecalls being brought up on the diverse likes of The Lone Ranger, Ivanhoeand Phil Silvers, all of which collectively influenced Coltrane's life. Asfor comedy, the late British legend Tony Hancock was another huge influence."In terms of subtlety he was on the same level as 'The Office'. Now 20 yearsago no-one would have got 'The Office' here because irony had not beenrediscovered. There was a whole gap in American history where irony justwent on holidays. I tell you, Steve Martin was one of the only greatironists that really made it. Irony kind of disappeared from American comedyfor about 15 years and now, I mean you don't get any more ironic thanFrasier do you? My god, the whole thing is about irony isn't it?"

There may be nothing ironic about Harry Potter, but at least the film has insome ways reinvented Robbie Coltrane, for better or worse. Coltrane's nextbig problem is getting his teeth into Harry Potter and the Goblet of Fire."The script isn't finished and they can't give you a schedule until they'veworked it out. The trouble with 4 is working out what to leave out. Itshould really be 2 movies and everyone says you can't do that. Remember KILLBILL?"