Kevin Costner - The Upside of Anger 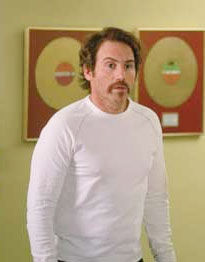 The Upside of Costner.

There is always something relaxed and playful about Kevin Costner, lookingtanned and youthful at 50. Sporting a moustache, Costner seems to beenjoying a renaissance of so9rts, both personally and professionally.Already receiving early raves for his comically sardonic portrayal of anex-baseball player who falls for an often mean single mother of fourdaughters, in The Upside of Anger, Costner also loves being married thesecond time around to model Christine Baumgarten. The couple had dated forabout five years when the Oscar winner finally decided to take the plungeand has no regrets about tying the knot again. "Well, I was glad to marryher," the actor says, laughingly. "I feel good about marrying her, and I wasworried about it for a while," he admits. Costner says that he was not surehe would take the plunge following his divorce from first wife Cindy. "Iwasn't sure that I would, and I didn't date with that in mind," says theunusually open and circumspect actor, now also pondering at what phase theirrelationship is in. "She's younger than I am, as she's gonna be 31, andthere's a lot of things that she's getting a chance to do, and I enjoywatching her do that, and kind of blossom as a person. She's a very goodeditor, and very kind of design oriented, so I'm enjoying seeing her dothat, and I can actually see the cycle of what she's going through. She's mypartner, in my life, and so I like her, I like that she cheers for me. WhenI do something good, I like knowing that I have somebody cheering for me, ona psychological level." And Costner is not ruling out having any childrenwith this second spouse. "I know she's keen especially now that she's 31, soI guess we'll see."

Costner is happy in love, but equally happy in career, with his comedicsupporting turn in Upside of Anger having received critical acclaimfollowing its world premiere at this year's Sundance Film Festival. Costnersays that he was attracted the character because he was somebody heunderstood after reading the script. "I saw it very clearly, as an Americancharacter and this as a very American movie, with very universal themes ofmen and women," the actor explains. "I thought it was a very original voiceand it humoured me while challenging me, as a lot of the humour comes fromvery challenging themes. The scenes are funny, but we don't know if they arefunny or if they are just a train wreck and we just watch in amazement.There is a lot of laughing out loud and some laughing in disbelief and thatis kind of a pleasing cinematic experience and I think all of those thingsexisted in Mike Binder's writing which is why I wanted to do it." Joan Allenstars as the film's often embittered and happy-to-drink matriarch, who findsherself involved with Costner's alcoholic ex-baseball player-turned-radioDj, in the film, written and directed by Mike Binder, one of Costner'soldest friends.

The actor was unconcerned at playing a guy who is a bit overweight, anddrinks too much in a role which required him to disregard ego. "I haven'treally been that careful in my career and maybe I should have been, to makesure I didn't make a misstep. I had to put 20 pounds on for the movie,because he wasn't the kind of character to lift weights. I've playedsupporting characters before in movies like The War and recently in RumorHas It, and for this, I started off thinking the movie was great. There isno use in being the head flea on a dead dog, because you can have a reallygreat part and have the movie add up to nothing. They always have thatpotential, but I think you have to start off with a chance, and I think Mikeis very close to being our generation's Woody Allen, but instead of all themovies set in New York, they are set in Detroit."

Costner also gets to work with a quintet of beautiful women of varying ages,from Allen to Erika Christensen, Alicia Witt, Keri Russell and Evan RachelWood, smilingly conceding that "they were all easy on the eyes and they wereall happy to be working on an intelligent script. Mike handpicked all ofthem so they all felt they deserved to be there and wanted to be there. Itwas fun and there were moments that felt very real and very funny. Thesemovies are all hard to do and this one was just as hard, but it was fun towatch them and it will be fun to watch their careers, regardless of whathappens."

In giving his younger co-stars advice on avoiding the pitfalls ofHollywood, Costner is both matter-of-fact and circumspect. "I don't thinkyou can avoid the pitfalls and live a real life. Some movies do well andothers don't, but you always have to remember why you did the movie. At thepoint it doesn't seem fun or productive and you should have the courage tostep away instead of just doing it for the sake of doing it. They've allachieved something even at this age, so it's okay to say I was in aHollywood movie once, and then take their kids to soccer." Costner is morethan happy saying that when it relates to his own perspective on Hollywoodand stardom. "My life is a lot more than Hollywood, but I've always reservedthe right to invent my life and to step out of it if I want to. So I kind ofcounsel myself and ask: Do I have the courage to do that? There is a lot ofmoney in doing this, even if you don't like it and that can be theseduction, as well as the trap," Costner concedes, adding that his family,his children, and his life outside of Hollywood, are what keep him real. "Weget caught up in the trappings of all of this and we want to be respected,and we want a little bit extra. Then when you see your children succeed, yourealize that is the highest thing you can get. When my oldest daughter was asenior playing volleyball, I went to every game. She understood what she waspart of and she went to every practice and every game, so when you try toadd up what is important, I was very proud of her and I know those are themost important moments. I also know that outside my own family I need toconquer some things. I am a boy and I need to make my mark. I do that inmovies and other ventures, so I try to live a very full life. I know most ofit doesn't mean anything other than who is going to hold your hand duringyour last breaths."

Costner will next be seen in Rumour Has It, now directed by Rob Reiner, whoreplaced the film's writer, Ted Griffin, who was originally set to direct,but was fired from the project. "He wrote a beautiful script, which is why Idid it, and I hadn't started work yet, when that particular thing happened.Ted's a friend of mine, and was at my wedding, so you can imagine how Imight have felt for him., I've never really been able to uncover themechanics of how that went down However, they brought in a world classdirector, in Rob [Reiner]. For myself, I made a career of working with a lotof first-time directors, so I'm not really afraid of that. and I've used alot of first time people in other capacities, be it cinematographers andproduction designers. I worked at Raleigh Studios for a long time, and it'shard to get started, and somebody has to give you a chance, and so I don'tdo that all the time, but I do it." In that film, Jennifer Aniston plays awoman who learns that her family was the inspiration for "The Graduate" --and that she just might be the offspring of that well-documented event.Costner says it's by no means a sequel to the classic original. "This isquite an original comedy in its own right, and a lot of fun."

A star for some two decades, Costner says that he remains as passionateabout what he does now, as when he started. "I'm passionate about the work,you know, even though I don't like living in trailers, and that's a lot ofthe life of an actor. But I like very much to perform, and when I seesomething that's great, my own vanity comes out. I think maybe that thismovie this will live forever and it will be passed on, and not dismissed."

As for his life today and his place in Hollywood, Costner couldn't behappier on both fronts. "Well it's pretty great for me, it really is. But Ilike to think that I'm involved, and I think maybe, people are catching up.I've kind of been the same, and I think I've conducted these interviewsalmost the same as I had twelve years ago and I don't really change. I likelong movies, and different kinds of movies. In 'Raging Bull,' he says you'venever got me down, he's still standing, so I feel like that I enjoy makingmovies, I like the experience in the dark, that we continue to go to. Imean, the world still is evolving and changing so rapidly, we know whatthat's like, but still every one of us still find ourselves in a theatre,albeit it's your job, but if you step outside of yourself, there's manypeople who still go to the theatre, to sit in the dark, and watch a movieand they're still looking for something to change them, some fresh air, tofeel some light. So, people that go to the movies feel strongly, and I feelstrongly when I make them."

THE UPSIDE OF ANGER OPENS ON MARCH 11.