Kevin Costner as a serial killer may seem an unlikely role for the Oscar winner to take on, but that's a simplistic analysis. In Mr Brooks, Kevin Costner does play the nice old-fashioned family man whose inner self (actually played by William Hurt) is the killer, akin to Dr Jekyll and Mr Hyde.

Kevin Costner insists that this latest character may not be as a significant departure as one might expect. "When audiences see it I think they're not going to be surprised at all. I think they're going to see, 'I know why he did Dances with Wolves and I can see why he did this movie'. It's not a movie where I say 'Ooh I'm going to do a departure'. I think people who don't look really close will look at it that way, and if they I've invested at all in what I've done in terms of my career, will go 'You know what? This is just like him', meaning it's about the film." Kevin Costner, whose career has often been defined by playing stalwart characters, doesn't see Mr Brooks as a means to "try to reinvent myself or to try and prove that I can act, because that's just bullshit to me."

A clearly impassioned actor, Kevin Costner is aware of his critics, happily maintains that he is "comfortable with what I do and how I do it, and to me it's always still about the movie. So when I read Mr Brooks, I thought, that this is a really different take on it and very entertaining. Therefore I think, if you have an appreciation for some of the things I've done, I think you'll go 'Oh f**k man, I get this perfectly, because this is just like you."

Kevin Costner is reluctant to fully describe this unusually dichotomous character, someone who strikes a balance between 'normality' and the darker side of humanity. "I couldn't describe it because believe me, you're going to see the movie for the first time, and it's going to be an original experience for you. I had to read the movie for the first time as an original experience that just kept being real to me - real in the sense that I went 'OK, smart', 'OK, funny', 'OK, odd', 'OK, ugly'. Everything that goes with this genre is there but how it's all put together is, I think, quite unique." 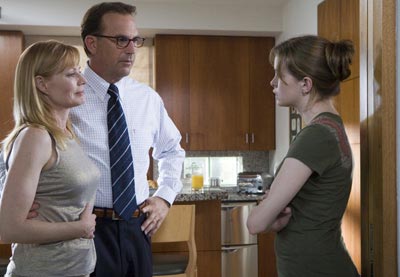 While it seems that Kevin Costner works less these days, now that he is a relatively new husband and even newer father, the actor/producer denies that the older he has become the more selective he is in what he chooses to do, and he has no regrets about his choices. "I always felt like I'd been selective and have always gone for the individual movie and into different genres. I always thought a movie that I started could be great, they haven't always turned out that way and I think I know the reasons why, but that's just a longer conversation," Kevin Costner concedes. "But I never started a movie I didn't think would raise the bar in its genre or be really great. It's just what people do with the movie once it's been made." This remains one of Kevin Costner's pet peeves, the sheer homogenisation of Hollywood. "They try to market these movies to try to get the largest possible audiences, so they start to really devour everything, and just take the guts out." Kevin Costner adds that in order to effectively market a mainstream film, "they take anything that's uncomfortable out, so consequently some movies aren't made, or it's softened and I think 'What the f**k and why did we soften that, because it was already kind of a sweet movie.' Then they took out the things that really made people squirm."

Thus his attraction to making Mr Brooks, as both producer and star, is that "I believed I'd better do this one myself because what's kind of ugly about it, what's kind of funny about it, what's kind of bloody about it and gory, I think need to be there." Yet Kevin Costner hastens to add that despite his misgivings over what has been to dilute commercial films, Kevin Costner says he is far from anti-Hollywood. "I don't mind Hollywood. After all, I don't make movies that are like avant guard or not understandable. I just like to make a mainstream movie with all the edges that existed in the writing and I don't like to see it flattened out in order to cater to audiences," he says, frankly. "I don't really give a shit what people think about my movie after watching it and giving it a test score, but I really care about what you think about it when you see it in its purity, because I don't' feel like I'm going to lose you. I don't feel like my movies are going to be for everyone because they're not, because sometimes they're more adult and that eliminates kids. So that's my frustration with movies and something like Mr Brooks I just thought, 'You know what? It's such a dark and cool little movie, that if people manipulate it it's going to flat out and become horrible and it won't even stand a chance to be what you might have liked.' " 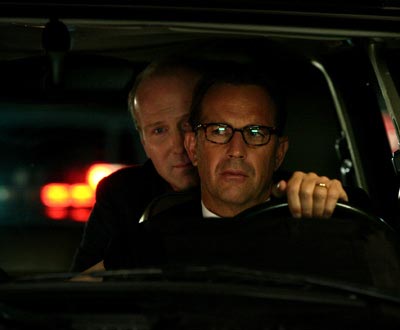 Kevin Costner laughingly says that in trying to find the balance between personal tastes and mainstream audience expectations, "I don't have that problem, but the people that actually have control over how a movie goes out have problems with that. When I decide to do a movie it's because I like the script, not because the script is 60% there. I'm kind of anal, because the script has got to be there completely and when it is I think 'You got a winner here and it's going to work with some audience really, really well, they're going to talk about it - if we don't f**k it up'. You don't try to make it for a larger demographic. so I don't' really second guess my taste. I mean, Mr Brooks is not for everyone, but for those who can enjoy Mr Brooks, it's as close to being what it could have been."

Kevin Costner is very philosophical about his own metamorphosis as an actor and filmmaker, since becoming a bona fide star two decades ago. Rarely looking back on his early work, Kevin Costner says "I don't feel like I've changed at all from the day you first interviewed me," referring to our first interview the morning of his Best director Oscar nomination for Dances with Wolves. "I'm older, and more aware of the world." Looking back at the classics he made, he is equally philosophical about the disappointments. "You take a movie like Dragonfly or Message in a Bottle, movies that on paper were really good, I think were ultimately flattened out, into a very soft love story. There is a reason why I did those movies but you don't ultimately get to see it and I don't understand why."

Yet amidst the flops, remain the seminal classics that defined his career, from The Untouchables, to Bull Durham, Field of Dreams and Dances with Wolves. "I can look at Dances and go 'Oh shit, I would have edited that a lot differently, or would have taken that little cute thing out or blah, blah, blah. I haven't seen those movies, though, for about ten, fifteen years, because I kind of go forward in my life. But as far as I can on them, I make every decision knowing that it's going to be for an audience and then I let it go." Asked if he would make sequels to his hits, especially the likes of The Bodyguard and Robin Hood, Kevin Costner doesn't rule anything out. "I would do it if I thought it was appropriate, and if a great script came. I just wouldn't do it as an automatic afterthought, so I'm a little bit the odd man out. I think that's attributed to people being like angry at me that I don't just go out and do anything, but I'm not against it." 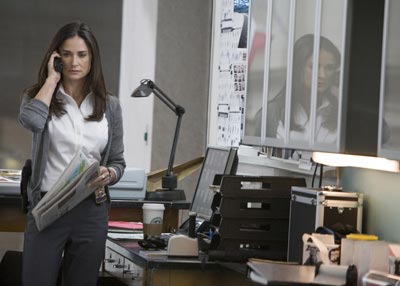 As for his future plans behind the camera, Kevin Costner says, "I have a couple of movies that I've spotted, about three movies that I think I'm going to direct." Immediately on the horizon, however, is "a kind of a comedy that I'm just financing 100% myself, a kind of a Capraesque comedy."

Kevin Costner says that his professional priorities at this stage of his career "are to try and maintain a relationship with those who are watching my movies and to make sure these movies are being what they should be, so that you'll feel better about it. Whether you like it more or less, that's really up to you and I don't want to manipulate you that way. I need to be true to myself and to the movie, having already made up my mind that it has the potential to be liked by an audience."

But the actor also has personal priorities that have shifted with the recent birth of his son, Cayden Wyatt. He sees fatherhood this time around as "interesting" and his priority and goal for his son "is to try to raise another boy that can change the world." Like father like son? "Well I think that's our obligation as men, right? I mean it doesn't have to be in a big way, but it's like, 'Let's raise a good man and somebody who makes a difference.' "

Kevin Costner stars as Earl Brooks, a man whose seemingly perfect family and status in the community hide an ugly secret. Brooks constantly says the plea of an addict--the Serenity Prayer--but hes not in the grip of drugs or alcohol. Instead, his neat little bow tie belies a man with an urge to kill. Though hes staved off that desire for two years, it has returned thanks to the efforts of his evil inner voice (William Hurt, A HISTORY OF VIOLENCE). He is caught in the act by a man who calls himself Mr. Smith (Dane Cook, EMPLOYEE OF THE MONTH), but Mr. Smith doesnt want to turn Brooks in. The smarmy amateur photographer wants to learn from Brookss methodical ways and become a killer himself. Meanwhile, a tough cop (Demi Moore, BOBBY) hunts for the man responsible for deaths all over Portland while she deals with issues in her own life.

MR. BROOKS presents a fascinating portrait of a man at war with himself. As the devil on Brookss shoulder, Oscar winner Hurt adeptly alternates between menace and glee, adding to a resume already replete with varied roles. Though Costner is mostly known for playing nice guys (FIELD OF DREAMS) and charming rogues (BULL DURHAM), his performance as the tortured killer is interesting to watch, and he rises to the challenge of playing a completely different character than the kind he is known for. MR. BROOKS is an engaging thriller that goes into the fractured mind of a murderer, while also delivering an intriguing maze of multiple subplots.