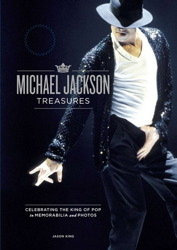 Celebrating the King of Pop in Memorabilia and Photos.

A lavishly illustrated tribute to the singer's life and career- including removable facsimile memorabilia!

Michael Jackson left a legacy of extraordinary showmanship and endlessly influential music. One of the greats, he is an icon of the highest order whose talent and legacy remain indelibly etched in the memories of his fans.

In a fitting tribute to his extraordinary, influential work, The Michael Jackson Treasures showcases 180 images and items of removable memorabilia, offering fans a hands-on exploration of his day-to-day struggles and triumphs.

Tracing the evolution of his career from The Jackson 5 all the way through his early solo work, to the runaway success of 'Thriller', his legal troubles and the outpouring of support and memories from fans and friends after his death- this book is a must-have for any Jackson fan.

Featuring a number of rare pieces, including selected pages from the Jackson children's high school year book, the patent for the antigravity lean shoes from 'Smooth Criminal' and die-cut mask from the Dangerous tour, The Michael Jackson Treasures is a trove of powerful images and a celebration of the star's complicated, fascinating life.

Review: Treasures is an understatement, for anyone who loved or appreciated Michael Jackson's talent, this is a keeper.