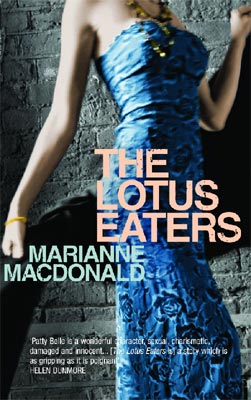 In Beverley Hills in 1998, British celebrity interviewer Lottie meets Patty Belle, a minor Hollywood actress. In the scorching heat, as she drinks her Virgin Mary and her companion sips champagne, Lottie immediately recognises and responds to Patty Belle's magnetic appeal. But they are not to meet again until many months later back in London, when they become flatmates.

Patty is in love with being in love. Strikingly beautiful, she both knows, and at some level is entirely unaware of, the impact she has on men. As she falls for one after another of Lottie's male friends, destroying relationships and marriages, she can only say 'But we couldn't help ourselves!'. Eventually Patty manages to destroy even her friendship with Lottie as with everyone else she has ever been close to, except those most damaging to her. A Marilyn for 90s London, she is lovable, infuriating, and seemingly as naive as a child.

Patty is a girl about town with the unforgettable charm of Holly Golightly in Breakfast at Tiffany's, Sally Bowles in Goodbye to Berlin and Lorelei Lee in Gentlemen Prefer Blondes. Set against the London of the dotcom boom and the USA of Clinton's impeachment, THE LOTUS EATERS is a stunning and deceptively sophisticated novel.