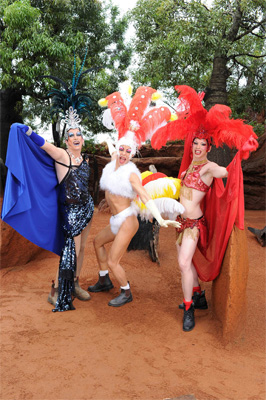 The Adventures of Priscilla at Madame Tussauds Sydney

In the spirit of Sydney's Mardi Gras, Madame Tussauds Sydney unveiled a wax figure of one of Australia's most iconic actors, Guy Pearce, clothed in full drag regalia. Revealed for the first time, Guy Pearce's wax figure is dressed as the unforgettable Felicia Jollygoodfellow from The Adventures of Priscilla Queen of the Desert (1994).

Pearce's wax figure didn't need Felicia's obnoxious persona to get noticed, with the character flamboyantly dressed in nothing but red, yellow and white feathers; the same outfit worn when Felicia, Bernadette and Mitzi reached the top of King's Canyon.

Playing an integral role in the creation of the wax figure, Pearce said 'You know they always said it's painful being waxed, well they're right. Trying to hold a 'Priscilla' pose in my 40's was far more difficult than in my 20's. I'm thrilled of course to be included in this new exhibition. As a kid I visited Madame Tussauds in London many times and to now be part of the international collection, particularly in such a masculine way, is truly an honour."

Whilst a bottle of champagne wasn't smashed on a -budget Barbie camper' at the official unveiling, the Director of The Adventures of Priscilla, Queen of the Desert, Stephan Elliott was present. Elliot commented, 'Guy had just finished his role on Neighbours when I cast him as Felicia. People thought it utter lunacy. Mike from Ramsey Street in drag? Are you kidding? Mr Pearce had the last laugh of course. Felicia's bus top opera became one of the most iconic images of Australian film. Only last week I saw a caricature of Prime Minister Gillard dressed as Felicia on top of Kevin Rudd's bus. That's parody 20 years on. It still astounds me."

Representing over 250 years of artistry and techniques, each Madame Tussauds figure is meticulously crafted to perfection with over 60 artists and sculptors. Over 250 measurements were taken of Pearce, whose figure took up to three months of dedicated work to create.

Madame Tussauds Sydney will open on Sydney's renowned Darling Harbour in May and will be a place to get on stage with the stars, rub shoulders with the most powerful politicians and challenge your favourite sports heroes. Guy Pearce will now join the unique line-up of celebrities already announced to feature in Madame Tussauds Sydney including Dannii Minogue, Ray Meagher, Amanda Keller, Nicole Kidman, Hugh Jackman, Johnny Depp and Lady Gaga.

To find out more about Madame Tussauds, visit: www.madametussauds.com/sydney