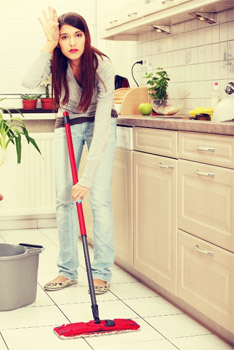 The unequal share of housework in Australian families is a major cause of arguments between men and women, with the majority of women, 75 per cent, carrying out the bulk of cleaning duties in the home and 58bper cent feeling resentful as a result, reveals a survey of more than 3,000 Australians.

'Every year we conduct a household survey to keep track of consumer habits.  This year we focused on housework which showed that 69 per cent of women argue with their partner about the unequal share of household tasks and that there is a huge difference between what men and women do in the home," said Harry Bolanakis, national marketing communications manager, Fantastic Furniture.

With regards to specific tasks, only seven per cent of men clean the toilet, ten per empty or stack the dishwasher and just four per cent make the beds.

Almost a quarter of respondents, 24 per cent, said their partners started out helping when they first lived together but this had dropped off over the years.

When it comes to meal preparation and cooking, the imbalance continues, with only thirteen per cent of men taking charge of the weekly grocery shop and just ten percent cooking the evening meal. Mums even take charge of the household finances with 73 per cent paying the bills.

'When you consider that over half of the women surveyed work full or part-time outside the home, as well as managing the household, these results clearly show a huge imbalance between the sexes," said Mr Bolanakis.

Where men did score favourably was in more traditional tasks.  72 per cent do the DIY/home repairs and 69 per cent mow the grass.

'Clearly there is a discrepancy here between truth and fiction!" laughed Mr Bolanakis.

When it comes to rest and relaxation, 38 per cent of mums said they don't regularly have enough -me time' because they are too busy looking after everybody else.  The majority of mums, 44 per cent, said if they could have a treat, it would be a family holiday.  Just 16 per cent said they would like a romantic night out with their partner.

Most men enjoy more down-time than their hardworking partners with 54 per cent achieving plenty of time out for themselves.  Almost a quarter, 24 per cent, clock up more than ten hours per week chilling out on the sofa.  Just nine cent of mums manage to spend this amount of time relaxing.

'The survey results suggest it might be time for dads to roll up their sleeves and get cooking and cleaning to give mum a well deserved rest this Mother's Day!" said Mr Bolanakis.

Fantastic Furniture is Australia's leading value furniture manufacturer and retailer and specialises in providing a range of affordable packages and individual furniture items and accessories to suit a variety of lifestyles and tastes at everyday low prices.  The company manufactures approximately 120,000 Australian-made sofas each year and has 74 stores Australia wide.

Research Shows Why Motherhood is Exhausting

Australian research confirms that Australian mums don't have time to look after their health. Jean Hailes...