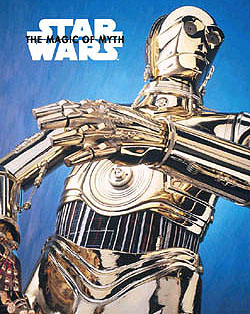 Star Wars: The Magic of Myth exhibition at the Powerhouse Museum - your chance to see original artefacts from
Attack of the Clones

More than 25 objects from Star Wars: Episode II Attack of the Clones, the latest film in the Star Wars saga, will be on view in the Star Wars: The Magic of Myth exhibition at the Powerhouse Museum from 18 September 2002 to 2 February 2003.

Highlights from the latest film include the full-scale vehicles used during a wild chase through Coruscant by bounty hunter Zam Wesell and Anakin Skywalker.

In one of the most important scenes in Attack of the Clones, Anakin and Amidala declare their love for each other as they wait in a Geonosian execution cart to be wheeled out to the Geonosis Arena. This execution cart is another important object that will be displayed at the Powerhouse Museum.

Included in the exhibition are Anakin Skywalker's 'Padawan' or Jedi apprentice costume, Padmé Amidala's battle costume and Zam Wesell's exotic bounty hunter garb. Costumes worn by the child Jedi trainees, include the 'novice helmet' that masked their vision to train them to use the Force rather than their eyes, will also be exhibited.

Sections of the Jedi Archives Library and the Outlander Nightclub (where Anakin and Obi-Wan Kenobi finally corner Zam Wesell), will be displayed with original set materials used while filming at Fox Studios in Sydney.

Star Wars: The Magic of Myth, which connects the films to elements of classical mythology and world culture, was first shown at the National Air and Space Museum in Washington, DC from October 1997 through January 1999. The popularity of the exhibition led the Smithsonian Institution Traveling Exhibition Service (SITES) to collaborate with Lucasfilm Ltd and bring the exhibition to some of the world's top museums. The Powerhouse Museum is the final and only Australian venue of this prestigious exhibition's tour. All artefacts in the exhibition are on loan from the archives of Lucasfilm Ltd.

The exhibition showcases original artwork, props, models, costumes and characters used to create all five Star Wars films - Star Wars: A New Hope (1977), The Empire Strikes Back (1980) and Return of the Jedi (1983) as well as Star Wars: Episode I The Phantom Menace (1999) and Episode II Attack of the Clones (2002).

The exhibition examines the mythological roots of the now legendary Star Wars saga. It deals with themes of heroism and redemption and the triumph of good over evil through the adventures of archetypal characters, such as the young hero, the faithful companions, the endangered maiden, and the wise guide. In the companion book entitled Star Wars: The Magic of Myth (Bantam, 1997), curator and author Mary Henderson explores the technical and philosophical influences of mythology in the Star Wars trilogy through text and illustrations.

SITES - a major outreach arm of the Smithsonian Institution - extends the Smithsonian collections, research, and exhibitions across the nation and to many countries. Since 1952, SITES has organised and circulated exhibitions on the arts, sciences, and humanities. Descriptions and itineraries for SITES exhibitions can be found at www.si.edu/sites.