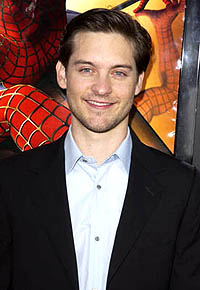 Having seen Tobey Maguire's work in the likes of "Cider House Rules" and "Wonderboys", it is no surprise that many scoffed at the casting of the actor in the title role of Spider-Man. Yet seeing him in the dual roles of the spider superhero and love struck nerd Peter Parker, there is a distinct feeling that one couldn't imagine anyone else for this part.

Even though Maguire is painfully shy and reticent, he was excited to undertake the intense publicity required to promote what can only be defined as his first Hollywood blockbuster, or as the actor puts it, "an event movie".

Yet during early press for the film, it was more the possible real-life romance between Maguire and his 19-year old co-star Kirsten Dunst that generated all kinds of rumours. His first experience dealing with the gossip press, Maguire says little on the subject, "except that I don't care what the media says or doesn't say, quite frankly," end of story. All he will say, is that the on-screen chemistry between himself and Dunst "was real because of the brave kind of actress she is", he admits smilingly.

Beyond what was clearly a business decision for the 27-year old actor to don the Spider-Man gear and take on this ageless character, was the chance, he explains, "to work with Sam [Raimi] who was the perfect choice for this film." Maguire adds, "he's [Raimi] great to be around and encouraging as far as me contributing ideas."

The character, as redefined by Raimi and Company, has an unusual complex duality that clearly was beyond the norm for this genre. For Maguire, Spider-Man "was as much a character piece as anything I had previously done", dismissing the often held notion that this was simply another comic book blockbuster. "I really loved the character that was just interesting to me with interesting, complicated relationships and a tough journey." Asked what set Parker/Spider-Man apart from other superheroes and their alter-egos, Maguire merely adds that "the popular answer to that question is that he's not a multi-millionaire or an alien." He wouldn't disclose what the 'unpopular' answer would be. "I don't think like that or in terms of comparisons." Maguire admits to never having been much of a comic book fan "so I really don't have much to compare it with anyhow." Maguire happily concedes that as a kid, he "never read comic books or watched them on television. I was certainly aware of the characters and probably pretended I was them."

Maguire has never been associated with the kinds of larger-than-life event movies that Spider-Man has set up to be. Maguire dismisses any additional pressure he might be under as a result of doing a film like this and remains philosophical as to the after-effect of the film on his own level of stardom. "You know, I'm just going to take it as it comes," he nonchalantly responds. He didn't feel the need to get advice from friend Leonardo Di Caprio whose life changed after Titanic hit. "I was there, so I saw how he dealt with it and it is what it is. I'm not going to even think about it and there's no reason to get nervous about it. It was obviously something I thought about in making the decision to do it, then after that I pretty much haven't thought about it, because it doesn't make sense to me that I get worked up over something that hasn't happened."

Not used to any degree of physicality on the screen, Maguire was required to perform his Spider-Man sequences in full costume, which required him to "act in a very different way when you have that suit on, requiring you to act using a very different kind of body language as the character"., he explains. "Sam and I talked a lot about keeping the audience with the character even though you can't see his expression." As for his action scenes, "it was mostly fun though at times it was a bit monotonous because it takes too long to shoot tiny portions of the film. But in other ways it was exciting because I didn't know what it was going to look like and I just had to put my faith in to everybody who was making the film." In preparing to shoot the film, Tobey worked out extensively and retained a vigorous, protein-intensive diet, one which didn't include beef, because of his vegetarian stance. "I'm a lacto-ovo-vegetarian, meaning I eat dairy with egg products, though I don't eat eggs and I'm not particularly fond of dairy either." All of this is ironic given the fact that his father is a renowned chef. "He just has to cook me stuff that I eat". Maguire doesn't cook too much at home, "but occasionally I'll prepare the odd pasta dish."

Maguire, who was born in Santa Monica, California, to a construction worker father and secretary mother, was raised predominately by his mother after his parents divorced when he was almost two years old. Maguire and his mother led an itinerant lifestyle, living with relatives all over the country, which perhaps may have attributed to his desire to become an actor. "I never know how to respond to those kinds of questions; I am who I am, my history is what it is, and I'm sure it contributed very much to me and brought me to this moment."

This 'moment' is the pinnacle of his career, now defined thanks to Spider-Man, and he's already contracted to do at least two sequels, the second of which will remain under the helm of Mr Raimi. "It should be fun, though there's no script as yet, but it'll be with the same group of people." Maguire makes no distinction between future smaller films or larger studio ones, insisting "that I go where the characters are, because everything I do, including Spider-Man, is character work for me."