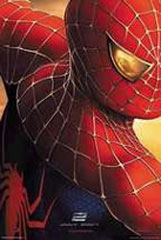 Synopsis:
In Spider-Man® 2, the latest instalment in the blockbuster Spider-Man® series, based on the classic Marvel Comics hero, Tobey Maguire returns as the mild-mannered Peter Parker, who is juggling the delicate balance of his dual life as a college student and a superhuman crime fighter.The entertaining adventure escalates and Spider-Man's life becomes even more complicated when he confronts a new nemesis, the brilliant Otto Octavius, (Alfred Molina) who has been reincarnated as the maniacal and multi-tentacled "Doc Ock."

My Verdict:
Ah, sequels! Aren't they great? 'Spiderman 2' is a return to the superhero as we know him, and for that reason the movie will not disappoint those fans from the original, and even acquire some new ones. The movie opens with some great artwork that is a history lesson from the first movie and therefore seeing the first before this one is not a pre-requisite.

This time around though, Spiderman (Tobey Maguire) has to deal with a few more emotional demons besides dealing with the way he said goodbye to his would-be girlfriend Mary Jane (Kirsten Dunst) in the first instalment. There is much more time devoted to these personal issues, giving Spiderman a deeper, meaningful touch than an "I will fight evil at all costs" persona. Spiderman is torn regarding his feelings for Mary Jane, driven to the point where he declares, "I am Spiderman, no more" and ditches his Spiderman costume in the garbage. He is free at last. But is he?

'Doc Ock'(Alfred Molina) is Spiderman's nemesis in this saga and he is a fabulous character, although he did cross over to the dark, evil side a little too quick. He is a scientist who has discovered a new form of power and upon revealing this to a media gathering, something goes wrong, and he ends up with 4 tentacles permanently attached to his back which he is able to control with his mind. Sometimes though, these arms seem to have a mind of their own. These tentacles enable 'Doc Ock' to scale buildings much like Spiderman and are one of the movies great special effects treats. Funding for 'Doc Ock' comes from Harry Osborn (James Franco) whose father Norman Osborn/Green Goblin (Willem Dafoe in a cameo) died in the first movie. Mention must go to J.K. Simmons as J. Jonah Jameson, the Daily Bugle editor who hires and fires Peter Parker numerously - Simmons is a scream.

'Spiderman 2' is a classic blockbuster, and is great entertainment created for the masses with plenty of financial support to provide eye-popping special effects. It at least has a decent storyline for its hero who is more than just do-gooder. Don't fret that this is the last we will see of Spiderman either, as the door is left wide open for another instalment.