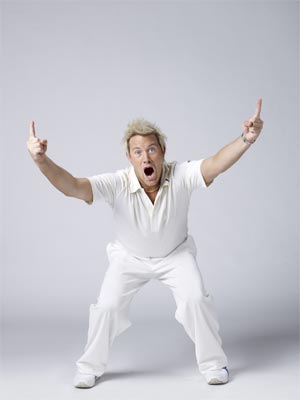 The real wizard of Oz is spinning into Melbourne this summer.

SHANE WARNE THE MUSICAL - ON SALE!

Australia, your musical is ready and ON SALE MONDAY 21 JULY 2008.

Weve seen singing cats, tenor ghosts, dancing coal miners and drag queens with bridges on their heads. Now Melbourne has a musical it can really call its own. The greatest spectator city on Earth has the sporting box seat each year on the last Saturday in September, first Tuesday in November and Boxing Day. Now Wednesday 10 December will take its place on Melbournes calendar as the day the sheikh of tweak finally got a musical all of his very own.

SHANE WARNE THE MUSICAL is a leg-spun yarn about what it means to fall arse-backwards into the Australian Dream and emerge a champion. In a country that routinely lops its tall poppies, this show sets out to both celebrate and understand the life of cricket's most adored and maligned hero as he battles fame, failure, fidelity and the ferocious Australian media.

The boy from Black Rock will be immortalised on stage by the most impressive team ever assembled for an Australian musical premiere.

Shanes ups and downs will be brought to life by the multi-talented composer and comedian Eddie Perfect with editorial assistance from Casey Bennetto, the creator of Keating!. Neil Armfield, one of Australias most acclaimed theatre, opera and film directors, (Keating!, Stuff Happens, Exit The King, Candy) will lead the creative team, with set design by Tony Award winner Brian Thomson (Priscilla, Keating!, Boy From Oz - Arena).

A sizzling live band and an exceptional cast, including Eddie Perfect as the man himself, bring to life a brilliant score which fuses soul, gospel, rock, power ballads, drum n bass, opera and even a touch of Bollywood.

SHANE WARNE THE MUSICAL is a new breed of Aussie music theatre that smokes, drinks, carries a few extra kilos and still brings home the Ashes. Made in Melbourne, by a boy from Melbourne, about the greatest player the Sandringham Line ever produced.

In keeping with the career of its subject, SHANE WARNE THE MUSICAL is officially a bloody big hit. The world premiere season will be extended into February, with tickets for Sunday 1 - Saturday 14 February going on sale at 9am on Monday.

SHANE WARNE THE MUSICAL is a new breed of Aussie music theatre that smokes, drinks, carries a few extra kilos and still brings home the Ashes. Made in Melbourne, by a boy from Melbourne, about the greatest player the Sandringham Line ever produced.

Eddie Perfect is...."the next superstar of Australian show business. He can sing. He can dance. He can act. He's funny...Hugh Jackman with a bit of an edge." Neil Mitchell, 3AW

"A glorious piss-take on celebrity, cricket and musical theatre." The Age

"Perfect's vision is an almost unimprovable mingling of satire and homage, cheek and deference, music and comedy." The Guardian UK