Secrets of Mary Magdalene - A Guide to Her Story, History and Heresy 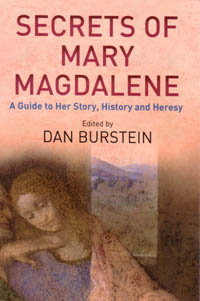 Interest in Mary Magdalene, the most elusive character in Jesus' life, has never been so great. Her role in Christianity and history is investigated here, to find answers to the questions which have come to fascinate so many people.

Mary Magdalene was a key figure in Christ's life. She was present at his crucifixion and she was also the first person to see him resurrected. According to Dan Brown's multi-million selling The Da Vinci Code, she was also his wife and the mother of his children. In the Gospels, she is described as an outcast and a harlot. This may be due to the disciples' jealousy of Jesus' love for Mary and the closeness of his relationship with her that was not replicated in his relationships with them. Dan Burstein, as he has done so successfully with the previous books in the Secrets series, explodes the myths and analyses who Mary Magdalene was, the true nature of her relationship with Christ and her role in the Christian faith.

Did Mary write her own Gospel? If so, what did it say? Where did she come from? Was she Jewish? How did she live? The eternal mystery of Mary Magdalene is given Dan Burstein's touch in this book, which is a must for anyone intrigued by her life and role.

About the Author:
Dan Burstein is an award-winning journalist and best-selling author of Secrets of the Code and Secrets of Angels and Demons as well as books on subjects ranging from China and Japan to the digital technology revolution.