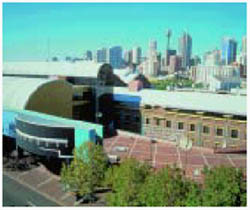 Star Wars: The Magic of Myth
18 September 2002 - 2 February 2003
One of the most visited Smithsonian Institution exhibitions of all time arrives at the Powerhouse Museum - the only Australian venue for this prestigious exhibition tour. Star Wars: The Magic of Myth showcases artwork, props, models, costumes and characters used in the original Star Wars trilogy - Star Wars: A New Hope, The Empire Strikes Back and Return of the Jedi. For this exhibition, artefacts from Episode I: The Phantom Menace and the latest film Episode II: Attack of the Clones will also be featured.

Developed by the Smithsonian's National Air and Space Museum and organised for travel by the Smithsonian
Institution Travelling Exhibition Service. All the artefacts in the exhibition are on loan from the archives of
Lucasfilm Ltd. Australian media sponsor: Nine Network Australia.

An exhibition of outstanding student work from the 2002 Higher School Certificate Design and Technology courses. DesignTech exemplifies the competence and confidence of an emerging new breed of Australian designers and technologists, and gives the public a glimpse into the future of Australian business and industry.

Presented by the Board of Studies NSW and the NSW Department of Education and Training.

Featuring 30-50 colourful portrait photographs by Japanese photographer Shoichi Aoki taken in the fashionable Tokyo suburb, Harajuku, from 1994 to 2002. Shoichi Aoki's photos document a fashion revolution in Tokyo's suburbs. They show the change in the way young Japanese people are dressing - in favour of an individual mix of handmade, secondhand and alternative designer clothing.

This exhibition explores the contemporary computer and communications technology used in the creation of special effects in film and television productions. Visitors can experience the technology by participating in the filming process, which places them against a variety of settings and dramatic sequences.

Augustus Pugin (1812-52) was England's greatest early Victorian designer and his only body of work outside Britain and Ireland is in Australia. Developed by Dr Brian Andrews, a leading authority on Pugin's metalwork, it examines Pugin's Australian heritage, through 280 objects including furniture, embroidered silk textiles, carved stonework, metalwork, books, paintings and engravings, architectural drawings and photographs, as well as original Pugin design drawings.

Organised by the Tasmanian Museum and Art Gallery.

Exhibition made possible by the Federal Government through the Visions of Australia funding program.

Births of a Nation

This exhibition explores experiences of childbirth around the time of Federation, and the connection between the birth of the nation and the first births of the nation.

Eden Killer Whale Museum 4 December 2002 - 5 Februry 2003
Sponsored by the National Council for the Centenary of Federation.