Celebrity baby care guru Pinky McKay is up in arms witnessing a wide spread movement that is undermining breastfeeding mothers in Australia. Women are ill informed and giving up on breastfeeding in droves and now the fight is on to bring boobs back into fashion!

Both the National Health and Medical Research Council (NHMRC) and the World Health Organization (WHO) state that exclusive breastfeeding until around the age of six months is preferred for better health outcomes. Only 15% of Australian babies are meeting this target.

In a society obsessed with weight loss and appearance it seems that people promoting the artificial feeding of babies are winning the war. Formula top ups and scheduled feeding are some of the commonly promoted practices that ultimately lead to a reduced breastmilk supply.

The biggest losers are new mothers and their babies who miss a precious opportunity to nourish and bond. "Anxiety over the sufficiency of breastmilk supply was the most serious problem, in that it often resulted in the cessation of breastfeeding."

Boobie Bickies - Back To Basics
Understanding the needs of a new baby can be stressful and it seems that a baby's hunger and how to best meet that need is a major cause of concern amongst first time mothers.

"A low breast milk supply is shown in studies as being the number one reason that Australian mothers stop breastfeeding. So, packaging up nutritious and readily available cookies based on age old recipes to aid lactation and support a healthy post natal diet seemed like a perfect solution," said Pinky McKay.

Pinky's Boobie Bikkies are rich in whole grains, protein, B vitamins, minerals, iron and Omega 3 essential fatty acids. With no GM or 'forbidden' foods, chemical additives or pesticides passing through your milk you can feel confident that you are giving your baby the best nutrition possible. 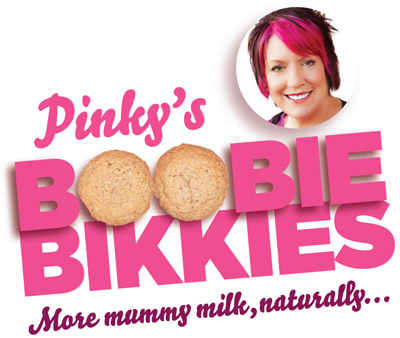 Pinky McKay, International Board Certified Lactation Consultant (IBCLC), specialises in gentle parenting techniques. A sought after keynote speaker and best-selling author with 4 titles published by Penguin, including her recent book Parenting By Heart. Pinky's books, parenting resources and her free newsletter 'Gentle Beginnings' can be found on her website www.pinkymckay.com.au

Question: Why is it important than mothers breastfeed their babies?

Pinky McKay: The biggest reasons are for their health and the immune factor; breast milk really does protect a baby's health now and into their future (childhood and adulthood). Breast milk provides a foundation when their bodies are brand new, forming new cells and forming organs which is most important.


Question: Why do you believe Australia has alarmingly low rates of breastfeeding?

Pinky McKay: The initiation rate is very high, over 90% but only 15% of Australian babies are being exclusively breastfeed until around the age of six months. As a lactation consultant I see a lot of women with young babies who obviously haven't had the help that they need to get breastfeeding established.

Nurses are busy in the hospital and women are booted out quiet quickly and they're vulnerable so they don't necessarily know when or where to reach out for help. I also believe there is a lot of family pressure such as mother's being told "just give them a bottle". People around a new mother often see breastfeeding as an either or choice and say "if breastfeeding doesn't work, put them on the bottle"; it's not an either or choice.


Question: What type of help do new mother's need?

Pinky McKay: It'd be great if mother's rang the Australian Breastfeeding Association hotline. Women should consider a little bit beyond the birth and think about breastfeeding when pregnant. Everyone is working hard in regards to childbirth but not breastfeeding because they think it's natural; it would be best if the mother had someone sit with them for half an hour and teach them what to do.

On the weekend I went to see a mother whose baby was three weeks old and would only go on one breast and because of that she'd had a lot of nurses snatching and grabbing and although this happens a lot it's not helpful. As a Lactation consultant I've never touched a woman's breast, I tell the mother what to do and it works!


Question: Where you surprised that only 15% of Australian babies are being exclusively breastfeed until around the age of six months?

Pinky McKay: Yes! It is a very low figure.

There is a lot of pressure, including from books that suggest starting a baby on solids earlier will help them sleep better and this is followed by some mothers because the pressure to have a sleeping baby is very strong. Some mother's will give their baby a bottle of formula at night time and what they don't realise is that it's the beginning of their own milk supply dwindling. Using very strict routines, early on and spacing out feeds doesn't give the breast the signal to make the milk because in the early weeks there is more breast development after the birth and if a mother doesn't follow the babies lead she doesn't set her capacity high enough; by following the babies lead a mother sets her breasts to produce more milk. There is a lot of misinformation about how to make breastfeeding work, out there.


Question: What nutritional benefits does breast milk have over powder or formula?

Pinky McKay: Breast milk is a living fluid that contains living organisms which kill bacteria and viruses. If a baby is exposed to a bug, that its mother isn't exposed to, when transferred via saliva to the breast the breast milk will produce antibodies for that specific bug. Breast milk is very powerful; in a test tube, breast milk can kill cancer cells. You can't receive those benefits in a powder, formula is for emergencies such as when a mother can't manage to breastfeed, formula isn't a first choice.


Question: Do you believe a mother's body image and society plays a major part in choosing a mother formula?

Pinky McKay: There is a level of discomfort regarding breastfeeding in public and a lot of mothers express milk for when they go out rather than breastfeed in public which could be caused because our breasts have been sexualised in our culture and because of that there is a level of embarrassment. Sometimes some women have pressure from partners not to bare their breasts in public whilst some men want to share bonding with the baby by giving it a bottle and this can become quiet detrimental for a lot of mothers.


Question: How can Australians support mothers to breastfeed, for longer?

There are very high expectations on what some mothers should be doing and they are allowed to slow down. Breastfeeding does get your body back because it burns calories, hormonally it's very good for your body and it shrinks the uterus back into place. A celebrity recently explained that she breastfed to get her body back and whilst all women are different there are a range of health benefits for women when breastfeeding.

People need to acknowledge the big job it is to birth and produce milk for a baby and be more nurturing to new mothers. In some cultures new mothers have 40 days where they are looked after by other women.


Question: Is there a particular case study you could share with us, where a mother has returned to breastfeeding?

Pinky McKay: A mother had twins and she was messed around (given incorrect information) early and told that she wouldn't be able to breastfeed because she wasn't producing enough milk and was told to top her babies up with formula and she ended up completely formula feeding both babies. The mother wanted to breastfeed and when her twins were seven weeks old I spoke with her and we implemented a plan to simulate the breasts including hiring a double pump and showing her how to use it as well as taking Motilium which increases the milk supply for lactation. The mother worked hard for two weeks and ended up being able to produce almost enough milk for her twins, one baby went on the breast and fed well and the other didn't actually ever take to the breast but she was able to feed her expressed breast milk. The mother mixed-fed formula and breast milk however more than half of the twin's milk was breast milk.

I also made this mother my Boobie Bickies before I commercially produced them.


Question: What's the number one advice you'd give to new parents?

Pinky McKay: Trust your baby and trust yourself. Your baby is not out there to get you or manipulate you. You are not creating bad habits by loving your baby - if you want to pick up your baby and cuddle and enjoy all those cuddles do - don't listen to anyone who says you're going to spoil your baby and create bad habits. If you trust your inhibition you're not going to go wrong.

I will often ask mothers "what do you feel is happening?" and they will say exactly what is going on for their baby. Women need to trust themselves because they know their baby better than anybody else.


Question: What are your tips to settle a crying baby?

Pinky McKay: When a baby is crying pick it up and hold it close. Often walking outside with a crying baby will be a good distraction but remember whatever reason they are crying for - they are trying to communicate with you. Sometimes babies cry because they are sensitive to foods the mother has eaten and have an upset tummy or they may be overstimulated. Sometimes babies may just need something to suck whether it's your finger or breast.

What's best is to wrap them, cuddle them and to sit on a fit ball and to hum whilst gently bouncing. When you hum you slow your own breathing and that gives the baby the faint sound of when they were in the womb.


Question: What inspired you to create the Boobie Bickies?

Pinky McKay: I see a lot of breastfeeding mothers stuck on the couch feeding and feeding and they're exhausted and they can't get up to make themselves a sandwich so they're not eating. I often see mothers at 3pm and when I check on their diet they've had breakfast but they've still not had lunch. Some mothers have wakeful babies, in the evening and because they haven't eaten well during the day they have lollies, coke and coffee for a quick energy hit and that goes into their breast milk which unsettles their baby.

I have been giving out the recipes for Boobie Bickies to mother's for years but I know deep down that they would need someone to cook them, for them. I decided to make them after a friend suggested it and being me, I jumped in the deep end.


Question: What ingredients are in the Boobie Bickies?

Pinky McKay: The bickies contain flaxseed which contains omega-3s and Brewers yeast which is high in B Vitamins. The Boobie Bickies are high in whole grains, protein, B vitamins, minerals, iron and Omega 3 essential fatty acids. Low levels of omega-3 has been related to depression whilst high levels of omega-3 aid in brain and nervous system development which is why it is important to increase the levels of omega-3 in your breast milk.

The Boobie Bickies are healthy for mum and baby. All cultures have special foods that they feed to new mothers to help support a healthy milk supply and I did this research when creating Boobie Bickies to ensure mothers are nourished.