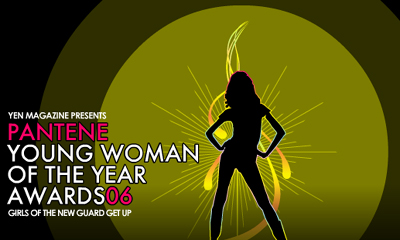 Girls of the new guard - get up!

Are you an amazing woman, or do you know one? Then get up and get involved - help todays inspiring young women make their mark by nominating in the Pantene Young Woman Of The Year Awards.

Created by YEN Magazine, the one-of-a kind initiative aims to be the most significant event for women in Australia, showcasing the nations most talented females as chosen by leading female role models, industry experts and most importantly - you!

Nominations are open to all Australian women up to the age of 35, for outstanding achievement across eight categories, including fashion, design, hairdressing, film, music, business, sport and community. An additional category, The New Face of the Year, seeks to discover a new face with huge potential - the next big thing in modelling.

Nominating is easy - simply head to the official website www.pywya.net before 31 May and state who you think should be recognised for their achievements in each of the categories.

A judging panel will then shortlist three finalists per category based on your nominations, and youll be invited back online on 1 June to vote for both category winners and the overall Pantene Young Woman of the Year.

"Todays young women are switched on achievers who shape the world we live in," said Ms Melissa Bergin, Director/Co-Founder of YEN Magazine.

"Through creating the Pantene Young Woman of the Year Awards, we will celebrate the achievements these inspiring women have made and support each others future."

"Make sure you get involved and nominate someone you think deserves to be recognised for their hard work," she concluded.

The awards are proudly presented by Pantene and supported by Mazda, Motorola and Fornarina.

The inaugural event will be held in September, featuring a whos who list of presenters and performances by some of Australias hottest musical acts.

So have your say and nominate today - but be quick - nominations close 31 May 2006. For further information on the Pantene Young Woman Of The Year Awards, visit the official website www.pywya.net.

Melissa Bergin is the Director and Co-founder of Paper Tiger Media Group and The Pantene Young Woman Of The Year Awards, Learn more about her amazing journey www.femail.com.au/melissa-bergin-paper-tiger-publishing.htm