Our Stories Our Visions 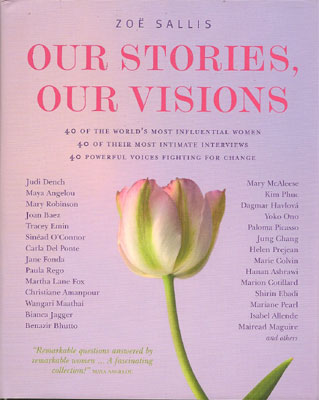 Our Stories, Our Visions

From writer Isabel Allende who is inspired by other people's lives, the books she reads and the places she visits to designer Paloma Picasso's plea for the younger generation to keep believing that they can make a difference, 40 of the world's most extraordinary women talk about what drives and inspires them in their work and life.

What inspires your life?
I am inspired by life itself, and by great ideals like justice, and the ability those ideals have to trigger greatness in us. What brings joy and inspiration to a life is its purpose.-Marian Pearl

I am inspired by adversity- Yoko Ono

What most provokes you to anger, and do you believe in forgiveness?
I believe in anger. Anger's like fire, it can burn out all the dross and leave some positive things. But what I don't believe in is bitterness. Forgiveness is imperative because you don't want to carry that weight around, who needs is? And it will throw you down. It doesn't help you to live life.- Maya Angelous

I live by forgiveness. I think we are all walking around wounded to one degree or another, and the only way we can begin to heal is first to understand the nature of the wound and then to forgive. Then healing begins- Jane Fonda

What is your greatest fear?
The thing I fear most is dying. As a Quaker I should be more resilient about it, but I'm not. We see so many people really suffering badly. When you watch somebody being very, very ill and then dying, you do think it's a kind of release for them, but at the end it's very grim.- Judi Dench.

Fear is not a sentiment that I like to have, so I move on to doing something about it, and I think that's the best way to react. I believe that feat is something you create yourself.- Paloma Picasso.

Do you think women can make a difference in the world and be instrumental in stopping war?
Women make up 51% of humanity but this is not reflected in the management of the world. Men make most of the decisions. Women do two-thirds of the labour, yet they own less than one percent of the world's assets. Women and children are collateral damage in times of war and also in times of peace. A critical number of women in positions of power, nurturing the feminine energy in men, will change the world and bring peace.- Isabel Allende.

I think that the biggest way in which women can stop wars or influence the world is by raising their children with proper values. Ultimately it comes down to what values are taught to the children who are going to be men in the future- Sinead O'Connor.