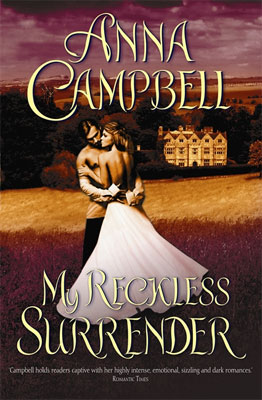 With a raft of awards to her name and endless critical acclaim, Anna Campbell has cemented herself a star of historical romance. Awarded Favourite Australian Romance Author and Favourite Historical Romance for Captive of Sin at the recent Australian Romance Readers Association Awards, Anna is reigning queen of all things Regency noir.

Back with another heady and enticing romance, Anna gives us My Reckless Surrender, a passionate tale brimming with desire, tenderness and betrayal. Get ready to be seduced by Anna Campbell's most sultry and alluring book yet...

Diana Carrick has very good reasons to seduce Tarquin Vale, Earl of Ashcroft, none of which she intends to share with the notorious rake. But instead of the selfish, jaded debaucher she expects, Diana discovers a man unlike any other, and even the dangerous secret she must protect cannot shield her from his dark allure.

The scandalous earl wearies of easy conquests and empty pleasures. When the mysterious Diana suggests an affair to while away a few summer weeks, he's intrigued and becomes increasingly and powerfully drawn to Diana's mix of innocence and passion - Unwittingly yet most willingly, they are playing with fire. Now the fuse has been lit and there's no escape - except surrender.

Praise for Anna Campbell:
'Her characters exhibit a depth of personality, moral fibre and emotion, defining them as the best of all people. The enthralling story is complex and passionate and readers will experience a delightful sense of satisfaction from watching Campbell's characters grow in stature and emotional understanding. Quite a book!' Romantic Times
'Though she made a splash debut with the controversial Claiming the Courtesan, Campbell's sophomore effort [Untouched] really showcases her dark gothic feel and strong literary style' The Courier Mail
'Get ready because Captive of Sin is an unforgettable, gorgeous novel - pick up a copy of Captive of Sin and enjoy this unique love story. You won't regret it' The Romance Reader
'So captivating I finished it all in one day - a shelf keeper, for sure. I'm totally sold on this novel' Romancereaderatheart.com

Always a voracious reader, Anna Campbell decided when she was a child that she wanted to be a writer. Once she discovered the wonderful world of romance novels, she knew exactly what she wanted to write. Her first historical romance for Avon was the multi-award winning Claiming the Courtesan, followed by another Regency noir, Untouched, which featured on several 'best of the year' lists. Anna then released Tempt the Devil and Captive of Sin, also award winning novels. Anna lives in Brisbane.