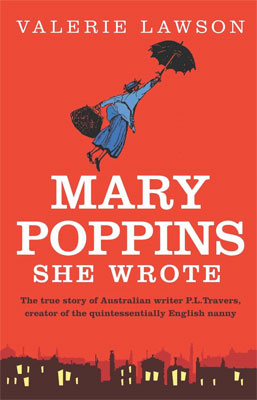 The life of P.L. Travers

The story of Mary Poppins, the quintessentially English and utterly magical children's nanny, is remarkable enough. She flew into the lives of the unsuspecting Banks family in a children's book that was instantly hailed as a classic then became a household name when Julie Andrews stepped into the starring role in Walt Disney's hugely successful film. Now she is a Broadway sensation all over again. But the story of Mary Poppins' creator, as this first biography reveals, is just as unexpected and remarkable.

The fabulous English nanny was conceived by an Australian, Pamela Lyndon Travers, who in 1924 came to London from Sydney as a journalist. She became involved with theosophy and travelled in the literary circles of W. B. Yeats and T. S. Eliot. Most famously, she clashed with 'the great convincer' Walt Disney over the adaptation of the Mary Poppins books into film. Travers, whom Disney accused of vanity for 'thinking you [Travers] know more about Mary Poppins than I do', was as tart and opinionated as Julie Andrews's big-screen Mary Poppins was cheery and porcelain beautiful.

The clipped, strict and ultimately mysterious nanny was the conception of someone who remained thoroughly inscrutable and enigmatic to the end of her ninety-six years. Valerie Lawson's illuminating biography, Mary Poppins, She Wrote, provides the only glimpse into the mind of this writer who fervently believed that 'Everyday life is the miracle'.

Valerie Lawson is one of Australia's leading journalists, and the author of the critically acclaimed The Allens Affair. Mary Poppins, She Wrote is her biography of P.L. Travers - the highly eccentric and talented Australian author who wrote, among many other things, the much-loved Mary Poppins books. It was originally released in 1999 by Hodder Headline to positive reviews and was short-listed for the Kibble Awards. It was published in 2006 by Aurum in the UK and Simon and Schuster in the USA.

Why did you believe it was important to write this biography?

Valerie Lawson: For two main reasons, firstly because Travers's life was an untold story. Everyone knows about Mary Poppins but hardly anyone knows who created her. Even if they have heard of P L Travers, they usually have no idea that the 'P' stood for Pamela and that even that first name was an assumed name.

Secondly, I think it's important that the lives of Australian women are told, and Travers was a very unusual Australian woman, brave, very talented in many different fields of life, a friend of famous poets and writers such as Yeats and T S Eliot, and an adventurer who spent time with so many communities, from Zen retreats in Japan, to the Navajo centres of New Mexico to the Hollywood studios of Walt Disney.


What does Mary Poppins, She Wrote reveal about Pamela Lyndon Travers that most readers will not know?

Valerie Lawson: It reveals that she was born in Maryborough, Queensland as Helen Lyndon Goff, that her father died when she was very young and that her mother, in grief, tried to commit suicide. It tells that she was a dancer, actress, poet and journalist before she wrote Mary Poppins and that Poppins began life as a character in a newspaper article, and that she sold the film rights to her Poppins' stories to Walt Disney but claimed never to like the movie starring, Julie Andrews. In my research I also discovered that although she had a rich romantic life, she never married and adopted a twin boy in 1941 and did not tell him he was adopted. The biography also reveals her flirtations with women and her lifelong pursuit of spiritual comfort by following in the paths of gurus such as Gurdjieff and Krishnamurti.


Why do you believe most people don't realise the author of Mary Poppins was Australian?

Valerie Lawson: Because she left Australia when she was only 24, (in 1924), and only returned once in the 1960s for a brief visit. She said she never really felt she was an Australian but rather, that she belonged in Ireland and England. She lived most of her life in Chelsea, London, and spoke with an upper crust English accent.


What do you think makes the character of Mary Poppins so enjoyable and popular?

Valerie Lawson: She represents the real and unreal worlds, being both a nanny and a magical creature that can travel to the heavens and down of the bottom of the sea. For parents of all generations, Mary Poppins offers the promise of respite from the pressure of caring for their babies and young children and for children themselves, she offers escape and adventure, and at the same time, comfort and security.