Michael Jackson's This Is It Movie 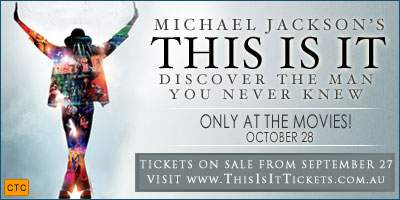 Sony Pictures Entertainment, in conjunction with Sony Music Entertainment, today announced that the first 24-hours of pre-sales activity for Michael Jackson's This Is It has resulted in record-breaking sales throughout the world as fans secure the first tickets to the two-week, limited engagement of the highly-anticipated motion picture.

With reports still coming in from nations around the world, it is believed no movie in history has generated so many ticket sales so far in advance of its release.

In North America, online ticket sellers Fandango and MovieTickets.com report that there is extraordinary demand for the film with hundreds of showtimes already sold out after one day of pre-sales. Some 80% of all online ticketing service transactions were for the film, which will debut in some markets with special advance showings the evening of Tuesday, October 27 and will open worldwide on Wednesday, October 28. The film is directed by long-time Jackson collaborator Kenny Ortega.

Across The United States, an unprecedented number of shows for the two-week engagement have sold out in the first 24 hours of ticket availability in locations from coast-to-coast, including such cities as Los Angeles, San Francisco, Houston, Nashville and New York, among others. Internationally, exhibitors from London and Sydney to Bangkok and Tokyo have experienced the same epic demand.

Commenting on the extraordinary results, Rory Bruer, President of Worldwide Theatrical Distribution for Sony Picture Releasing said, "Michael Jackson's fans all over the globe have enormous interest in this film and we can assure they will not be disappointed. This film delivers on everything they hope and expect to see. I think the initial sales activity we are seeing in the United States and United Kingdom to countries such as Australia and Thailand underscores the unique nature of this film, which is a special celebration of Michael and his music."

In Australia, staggering ticket sales have broken records, where tickets purchased for Michael Jackson's This Is It exceeded the lifetime pre-sales of such block-busters as Transformers, X-Men Origins and many more. Cinemas countrywide pushed the on-sale button for tickets at 12.01am on Sunday and today reported sell out sessions. Event Cinemas with their Gold Class cinemas are in huge demand, along with fans wanting to experience the movie on a Hoyts Imax digital screen. Village Cinemas in Melbourne kicked off huge sales offering a special ticket and commemorative t-shirt deal. Readings Cinemas reported huge ticket sales that are stronger than they had for HARRY POTTER AND THE HALF BLOOD PRINCE.

Moviegoers in Australia can get information about ticket sales by visiting www.ThisIsItTIckets.com.au for participating cinema details, or by contacting one of the 220 cinema locations participating in the release of MICHAEL JACKSON'S THIS IS IT.

The Australian Premiere of MICHAEL JACKSON'S THIS IS IT, will kick off the excitement at Event Cinemas on George St, Sydney on Wednesday, October 28 at 6.30pm, followed by public sessions Australia wide at 9pm that night.

Michael Jackson's This Is It will offer Jackson fans and music lovers worldwide a rare, behind-the-scenes look at the performer as he developed, created and rehearsed for his sold-out concerts that would have taken place beginning this summer in London's O2 Arena. Chronicling the months from March through June, 2009, the film is produced with the full support of the Estate of Michael Jackson and drawn from more than one hundred hours of behind-the-scenes footage, featuring Jackson rehearsing a number of his songs for the show. Audiences will be given a privileged and private look at Jackson as he has never been seen before. In raw and candid detail, Michael Jackson's This Is It captures the singer, dancer, filmmaker, architect, creative genius, and great artist at work as he creates and perfects his final show. Kenny Ortega, who was both Michael Jackson's creative partner and the director of the stage show, is also directing the film, which is being produced by Randy Phillips, Kenny Ortega and Paul Gongaware. Executive producers are John Branca and John McClain. The film will be distributed worldwide by Sony Pictures Releasing. For more information about the film please visit www.thisisit-movie.com.

Sony Music Entertainment's Columbia/Epic Label Group will release a two-disc album "This Is It" featuring music inspired by the motion picture. The album will be available internationally on October 26th and in North America on October 27th.

Review: I was blown away. Whether you are a Michael Jackson fan or not 'Michael Jackson This is It Movie' was an incredible insight into one of the most talented and artist muscian & entertainers in history. You can really get the sense of how passionate Michael Jackson was about his music, the theatrical side of his entertaining down to every beat and step.

This incredible performer, though fraile in appearance has an inner strength unparalleled. A true inspiration to musicians, dancers, costume designers & theatrical experts, you can really see that this was going to be an incredible show. Though we may not get to see the finishing touches, Michael Jackson This Is It Movie gives us a deeper appreciate of the artist behind it all, and definitely not to be missed. Michael Jackson is the only 80's artist that can still make the moves showstoppers with style.

Michael Jackson breathes entertainment, you can see that it's his very essence. But this passive man, emparts an import message of love & caring for each other and our world, and it's at this moment you realise how special he really was, not only as an entertainer but as a person with the deepest empathy for nature & people everywhere.

For the first time in when I've been in a cinema, as the credits rolled out, not one person moved, absorbing every last note through the credits, the tears welled as the realisation that this incredible performer is no more. But with a few glimpses at the end of the credits everyone is relieved they stayed!

Definitely worth the wait, MJ.