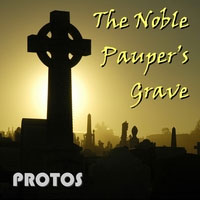 In 1982, Sussex-born Rory Ridley-Duff and Stephen Anscombe released One Day a New Horizon, now acknowledged as one of English progressive rock's 'hidden treasures'. Popularised by Japanese, UK and US record collectors, a misunderstanding led to hundreds of advance order requests pouring into Protos's web-site from Japan. With such interest, the band quickly established New Horizons Music and re-issued their original LP on CD.

25 years on, Rory and Stephen have now released another stunning contribution to the progressive rock genre titled The Noble Pauper's Grave.

The Noble Pauper's Grave tells the story of a man born to privilege who rejects his upbringing. Drawn to the plight of the poor, he helps to organise and rally support for their cause whilst finding love amongst them. A tale of humility, tragedy, courage and affection conveyed through ambient narratives and rock music.'

Protos co-founder Rory Ridley-Duff says "it is astonishing to find 25 years after releasing an album sold by word of mouth only to local friends, fans and family that the LP developed an international following. We're delighted that The Noble Pauper's Grave has established a fan base in Japan and the US so quickly."

Polish DJ Artur Chachlowski wrote in Metal Hammer "The Noble Pauper's Grave is one of the most beautiful albums released at the close of last year. It stands out against a background of exceptionally good releases in recent weeks."