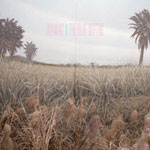 Combining the cinematic brilliance of Vangelis, the sweeping song craft of My Morning Jacket, and the ambient dreamscapes of M83, acclaimed Californian duo Odawas present their new album, The Blue Depths. A shimmering soundtrack- with the burning romanticism of a motion picture epic, and all the oddities and anachronisms of a David Lunch melodrama- The Blue Depths is a glistening, oceanic masterpiece, and one of the most unique albums you will hear this year.

Named after a Great Lakes Native American tribe, Odawas formed during 2003 in Bloomington, Indiana. Originally a trio, consisting of Mike Tapscott (vocals/guitarist/harmoica), Issac Edwards (keyboards), and Jessica Halverson (drums), the group self-released their debut EP 'Vitamin City' in 2004. Signed in 2005 to powerhouse indie lable Jagjaguwar- home of Bon Iver, Sunset Rubdown, Okkervil River, The Besnard Lakes, Swan Lake and Wilderness- Odawas went on to release their debut full-length 'The Aether Easter' later that year. Yet it wasn't until 2007, when Odawas slimmed down to the core duo of Tapscott and Edwards, releasing their acclaimed follow-up 'Raven And The White Night', that their potential began to be fully recognised. A critical favourite, the album was praised by Pitchfork for its 'newfound levels of confidence, cohesion and off-handed brilliance' and herald by CokeMachineGlow as 'strangely disquieting…like being stranded in a thick-walled cabin while a violent storm rages outside.'

Recorded during a stint in Chicago (before the band's recent relocation to Berkeley, California), Odawas' latest album The Blue Depths is the duos most gorgeous and in fully realised to date. At first glimpse of the album art- details from Helen Maurene Cooper's Birds Of Appetite series- it becomes apparent that a certain surreal quality will mark the contents within The Blue Depths. A sense of longing and desire is buried within the dizzying layers. Odawas heighten the more subtle components of previous efforts, unashamedly giving into their love of Vangelis' romanticism, Erin Serra's dusky mysticism, and the sweeping, Southwestern strings of Jack Nitzsche. They demonstrate their mastery of nudging to the edge of the over the top with enchanting results.

Brimming with hazy headphone meanderings 'The Blue Depth' evokes a dream world, where Neil Young and Jimmy Webb float in the reverb saturated summer breeze. Moonlight/Twilight boasts a solemn harmony, which floats atop murmuring waves of bass, as well as the ebb and flow of guitar notes. The Case of the Great Irish Elk constructs a dense and ethereal soundscape with its bursts of yearning harmonica. And Harmless Lover's Discourse- described by Triple J's Zan Rowe as 'woozily pretty'- delivers the albums most startling pop moment, when jubilant piano gives way to soaring rhythms and vibrant rays of synth.

Licensed exclusively for Australia to Rogue Records (Bon Iver, El Perro Del Mar, The Hold Steady), Odawas' The Blue Depth is one of the years most arresting and beguiling. Already garnering comparisons to everyone, from The Flaming Lips and Brian Wilson to Twin Peaks composer, Angelo Badalamenti, it conjures a dreamy and luscious euphoria which will resonate long after the album's first shuddering notes.

Praise for The Blue Depths:
Zan Rowe from Triple J "This record is woozily pretty… Sounding like a happy moment for an 80's film, with psychedelica sprinkled through these great rolling drumbeats, it just makes me feel warm and fuzzy." Catch of the Day (Harmless Lover's Discourse)
Wireless Bollinger "a lush and austere collection of songs… a depth and beauty emerges that makes The Blue Depths and understated gem."
Oceans Never Listen "atmospheric, serene, warm, glowing sounds."