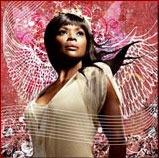 Following her induction into the ARIA Hall of Fame, Marcia Hines is taking her "Earth Mother" role as Australian Idol's voice of reason and supportive influence one step further, introducing audiences to the Metaphysical Marcia and a collection of not just songs on a CD, but chapters in the story of her life. "Everyone's life is remarkable. This album is about the heroism of everyday life. I am still a work in progress, but the life that I dreamed of is each day becoming a reality" Marcia says.

With Producer Paul Wiltshire (Delta Goodrem, Human Nature and The Backstreet Boys) returning to work with Marcia, the songs have been chosen because they have helped Marcia survive and given her strength through the years. They are the songs that have mattered most to her and have inspired her and her friends during her life.

One of the unique experiences Marcia shares on this occasion is the record's centerpiece I Am. For the first time ever she expresses her innermost feelings in a song co-written with Wiltshire. "I believe that women get better the older they get. Everyone seems to dwell so much on youth, but you get better with age. Life's experiences make you stronger, wiser and more resilient," Marcia says.

Born in Boston, in 1953, Marcia started her singing career in 1966 using the 'inglorious' stage name 'Shantee Renee'. She went to Woodstock in 1969, and a few months later she was on a plane headed for Australia on a six-month contract. 37 years later- she's still here.

Queen of Pop three times, Marcia has been married four times. And she's had hits in four decades.

Track List:
Chapter 1. Listen
Chapter 2. Everybody Hurts
Chapter 3. All Woman
Chapter 4. Imagine
Chapter 5. Get here
Chapter 6. Breath Again
Chapter 7. God Bless the Child
Chapter 8. I'll Stand by you
Chapter 9. You make me feel like a Natural Woman
Chapter 10. She's leaving home
Chapter 11. The living years
Chapter 12. No ordinary Love
Chapter 13. A house is not a home
Chapter 14. I am

This remarkable album features Marcia's exquisite interpretation of songs originally recorded by artists as diverse as John Lennon, R.E.M and Toni Braxton. But it's more than just a collection of songs, it is a body of work with a common thread of uplifting inspiration; a life affirming album exploring the joys and challenges faced by us all.