Infernal from Paris to Berlin 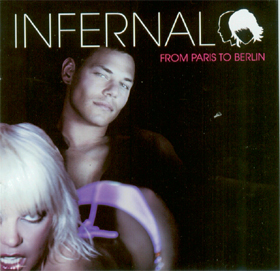 Danish duo Infernal have already taken the Australian charts by storm with the catchy single: From Paris to Berlin, Australian radio have embraced the track and from the city to the suburbs you can't escape the sound of Infernal.

From Paris to Berlin the album is a diverse record that covers a lot of ground, from upbeat dance numbers to heartfelt ballads the duo even asked world famous accordion player, Lelo Nika, to contribute to 'Cheap Trick Kinda' Girl' which incidentally is the follow up single. Lelo is quite possibly the most revered player of the instrument in the modern day. From Paris to Berlin the album is sure to establish Infernal as artists in their own right rather than one hit wonders.

So if you are Keen on Disco and Bass Driven Music or you like your ballads Deeper Still there is something for everyone From Paris To Berlin.

TRACKLISTING:
A01 BIG RIDE F*CKERS (INTRO)
A02 FROM PARIS TO BERLIN
A03 I TOOK A RIDE (FAIRYTALE)
A04 KEEN ON DISCO
A05 CHEAP TRICK KINDA' GIRL
A06 ULTIMATE CONTROL - featuring John Rock
A07 VIENNA
A08 DRESSED IN BLUE
A09 CAREFUL WITH THE BOYS
A10 DEEPER STILL
A11 BASS DRIVEN MUSIC
A12 SUNDAY MORNING MARCH