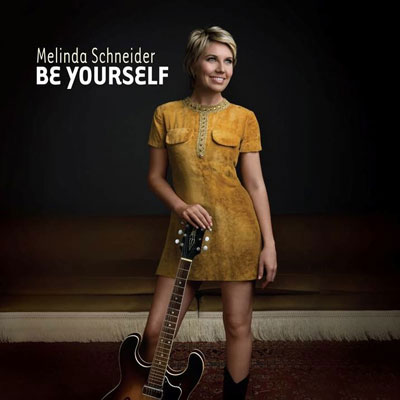 Australian singing songwriting treasure, Melinda Schneider, has teamed with the Australian Girls Choir to re-record a track from her Golden Guitar winning album 'Be Yourself'. The thirds single from the album, entitled 'Courageous', is a spine tingling anthem that will touch the Nation's heart with it's inspiring and uplifting message about the strength and courage within.

Melinda launched the single with The Australian Girls Choir live on main stage at The Gympie Country Music Muster.

'Courageous' was co-written by Melinda and Nashville collaborator Ben Cooper. Although the track was written within and hour, they both knew straight away that they had created something special, and 'Courageous' was quickly added as a late addition to Melinda's album.

"I knew I wanted to do something really different for the release of 'Courageous'. I had already recorded the song as a duet with Olivia Newton-John from her Great Walk to Beijing album last year and that was a huge thrill. Going into the studio with producer Les Gock and re-recording the song with the Australia Girls Choir was a completely different kind of thrill for me. When I heard the girls singing the chorus a cappella in the studio, I welled up with tears. It was extremely moving… Their voices are just beautiful" said Melinda.

"The Australian Girls Choir is proud to feature with Melinda Schneider on her incredible song 'Courageous'. Melinda is a great example of successful independent Australian artist and is a wonderful role model for the girls in the choir. 'Courageous' is an inspiring anthem that captures the element of the Australian spirit that sees us keep moving, keep working and keep striving, especially in the face of adversity." Nicole Muir, General Manger of the AGC.

For several years now Melinda Schneider has been a leading light of 'new-breed' of Australia Country artists both in Australian and internationally. In an exciting new phase of her career, Melinda launched her independent record label, Be Music. Through her own label she released her fifth studio album, 'Be Yourself', which earned an ARIA nomination and a Golden Guitar for the heartwarming duet 'Still Here' with Paul Kelly.

The highly acclaimed Melinda has also received a whopping six Golden Guitar awards as well as two Gold records for previous releases. It is no wonder that she has had songs recorded by Australia's most known and loved artists such as John Farnham, Billy Thorpe and Olivia Newton-John.

The Australian Girls Choir is most known for their successful work with QANTAS in their 'I Still Call Australia Home' TV campaigns. Their gorgeous rendition of the song has made the choir a household name for the last decade. The girls have performed with many of the country's biggest stars including Hugh Jackman, John Farnham, Delta Goodrem, Olivia Newton-John, Kate Cebrano, Jet, David Campbell, Jimmy Barnes and Marcia Hines. They have also performed and entertained dignitaries such as Nelson Mandela, Queen Elizabeth II, Pope John Paul II, Crown Prince Fredrick and Crown Princess Mary of Denmark.

"I always feel very uplifted when I perform 'Courageous' live. The feedback I have been receiving has been so overwhelmingly positive. I've had hundreds of emails from fans telling me their stories and saying that the song is helping them to get through their personal challenges in life. As a songwriter, that is the best you can hope for." Melinda said.

Praise for Courageous:"A beautiful song, written and performed by Melinda Schneider. This could be seen as fitting tribute to her late father and his colleagues. Melinda has never sounded better. Sgt Bean would be proud." - Ray Hadley OAM.
"This inspirational track is a song of our times. We all need encouragement in our respective journeys through life and 'Courageous' reminds us that in the face of adversity we can persevere and remain strong. That is a powerful message for every person who has an understanding that the only easy day in life was yesterday." - Andrew Scipione APM. Commissioner of Police. NSW Police force.
Melinda Schneider goes from strength to strength as an intuitive songwriter, with her brash, sassy blended country music commanding a wider audience with each step she takes. Courageous, which ahs the smell of a standard bout it, like Stronger and others in her confidence canon, seeks not just enteraintment but to bolster and encourage, perhaps even inspire. It's a sweet exhortation likely to reach a lot of ears."- Glenn A. Baker.