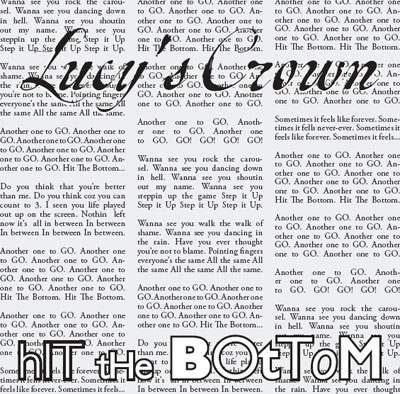 Lucy and her men in black, armed with Lucille (an 18th Century Harpsichord) are taking audiences by surprise with their breathtaking performances.

Lucy found her strength as a woman and her voice in Lucy's Crown, assembling a band - Sonny (bass), Marcus (guitar) and Daniel (drums).

Lucy's Crown musical mix is drawn as much from classical as rock, to create a background as colourful as the Lucy's Crown live show, a background for words of pain and redemption. Lucy's fearsome live show mixes alternative hard-edged rock, an 18th Century Harpsichord (Lucille) in a blinding live explosion unlike anything you've ever seen before!

Lucy's Crown released their first single Not the One in 2009, which was mixed by Lindsay Gravina (Jet, The Living End etc.), a raw outpouring of vitriol you can sing along to. Typically, Lucy also chose to have the same song remixed by DJ Kid Krush, signed to Ministry of Sound.

Review: The first single from Lucy's Crown, is 'Hit the Bottom' which showcases the ultimate in hard-edged rock music from this up-and-coming band.

Lucy's Crown allows you to get lost in the song, 'Hit the Bottom' with breathtaking guitar solos and absorbing beats. This single can be described in one word, 'amazing', the beginning sets the bar for a remarkable song and the music just keeps on delivering.

Lucy's Crown will go far; they are sure to have crowds shoutin' their name, shortly!

The single Hit the Bottom is out now
www.lucyscrown.com