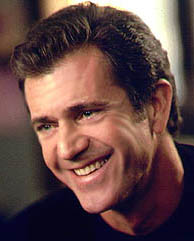 THE SIGNS CONTINUE FOR MEL

"Signs", the latest thriller from M. Night Shyamalan seems, at least on the surface, to be an unusual project for superstar Mel Gibson to embark on.

Gibson, a devout Catholic, found it fascinating to get under the skin of Father Graham Hess trying to uncover the mystery of crop circles he and his family discover on their farm. "I think this questions as to whether there is something out there, is there something greater than me, in whatever form you happen to think of it. And there may be many different forms out there, if it's Martians or angels, it's a question that most of us have contemplated with at some time or other. I think most people will be able to relate to this movie on that level, whether they accept or reject, it's interesting. Couple that with the strange and sometimes inexplicable phenomena of crop circles. It really is a story about faith and not so much about Martians," Gibson explains, smilingly.

Gibson says that miracles, a recurring theme in "Signs", is something he has experienced throughout his life. "Yeah, I've had some wild stuff happen to me. I remember being in a really horrible situation and it looked like certain death for sure," he slowly recalls. "I was driving across the country from Adelaide to Sydney and it's just a long flat road, you throw a brick on the accelerator and you go to sleep you know. I was used to doing about 95 all the way across and then you hit the Blue Mountains. You've got to slow down, because there are twists and turns. But if you go from 95 to like 25 or 30, it seems like you're crawling. And I got stuck behind this disgusting truck and he was belching his way diesel ally up the hill."

"I was looking for a way to get past, but there were too many winding roads and it was going up and up and up in the mountains. Finally, I saw this straight stretch, it was about 400 yards of just straight before I hit another bend, so I thought okay, now is the time. I pulled out and just jammed on the gas and went for it. There were signs all over the place saying be careful of soft edges and it was drizzling. The wheel hit a soft edge and I had sheer, rock on one side of the car and I started going into the rock wall and the mud slide. The truck was racing along and on the other side was a sheer drop."

"To avoid going into the wall, I steered one way and I then I steered back to the wall because the truck was going to get me, and the distance for the straight stretch was closing and another truck was coming the other way. I just kind of looked up and these two trucks were closing and I was out of control in the middle and the last thing I saw before I covered up my head was this massive gum tree just sticking out from the lip of the cliff. It was going to hit right on me. I swear it was no more than fifteen feet from where I closed my eyes and covered up my head. I let go of the steering wheel because the steering wasn't doing me any good, it was out of control. I felt these big bumps and crunches and stuff. I lifted my head up and the front wheels were hanging over and were still spinning. The big gum tree was crushed up against one door and there was a sapling on the other door and they had caught me in the middle from going over the side. So, it was one of those 'I wasn't going to get out of there alive deals' but I managed to not die. That was a miracle, you know. You can say, it was just dumb luck, I suppose."

Gibson breathes a sigh of relief at this point. This is Gibson's second film this year, and both times he played a father. In "Signs", playing a single dad, Gibson, who still remains happily married to wife Robin, was able to relate to the paternal facets of his latest character.

"Actually, I can't stand my kids," the actor begins laughingly. "Look, you bring your own experience to play as much as possible if you are trying to emulate some truth somewhere. You will dig in there and try and get a grain of it, so I can't say how, but I am sure on some level it all comes into play," he adds. 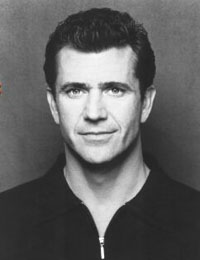 But while Gibson has a large family, asked how his kids would describe him as a father, Gibson shakes his head. "They are not too talkative with me, especially at the moment but they are getting better. They get real quiet when they go through the teenage years, but now they are adults. My daughter is in her 20s and I've got two twenty year old sons, and another one who's about to go to college, who is 18. We have a good time and I get on with them okay. I just had my son out the other day on the back of my motor cycle, he was flying around. He asked if he could drive and I told him he doesn't have a license and he has to stay on the back, so I took him for a really fast drive through some of the canyons and he got a buzz out of that. The thing that really made it good for him was that he didn't know whether I was competent or not, so he had a sense of adrenaline," he says laughingly.

Suddenly the discussion returns to religion as an angry Gibson hits out against the sexual abuse of children which is currently rampant both here in the US and Australia. "As far as the church goes, every institution is capable of being corrupted. That's a heinous crime against children and I think those people should really be punished hard, to ensure that others don't do it. I think the penalties should be big and there's no excuse for it. It's absolutely deplorable. That's human error." Yet, as Gibson calms down, his own faith remains unshakable. "That still doesn't shake any belief that I have that there is a God."

The other parallel between Gibson's character and his own life's experiences is that both are farmers. The actor still owns a large farm in Montana. "There are some crops that grow, but it's mostly cattle munching the ground." Gibson argues however that his "Signs" character "wasn't much of a farmer. You never saw him get out there on a tractor or anything. Maybe he was renting the land, I don't know", he adds laconically.

Gibson has been up and down but remains one of Hollywood's most enduring fixtures and cinematic idols. Often quoted as saying that the "tough times make you stronger", the actor still believes in that philosophy. "It's true, that what doesn't kill you makes you stronger. Look at the experiences that some people have been through. Horrendous experiences and if they come out the other side, they are different, they've changed and in many ways, they've had to adapt in ways that most of us haven't begun to comprehend about the nature of the human spirit and what you're capable of enduring."

Gibson himself has endured and he always knew he was destined for something - acting, fatherhood, or just plain survival. "You're supposed to be where you end up somehow. I am a big believer in pre-ordination. I don't think there's a lot of happy coincidence, I think it appears to be that way and to us it is. But I don't think we are calling the shots, you are going to end up where you're going to end up. You can tie your brain in knots with all this stuff."

These days he is more relaxed, certainly more focussed than the first time we met, which was over two decades ago. Asked finally what has made him a better man, Gibson smiles. "Gee, I don't know. Two steps forward and one step back. A lot of things I'm not real proud of. Are you talking about the marriage thing? Yeah, that's tough. The whole relationship thing is tough. I've been married for 22 years, and most people don't go that far these days. It just doesn't happen. You are going to get ups and downs. You are going to get times when you just want to strangle each other. Really. That's just going to happen, and it doesn't matter who the other person is. You might think if I find somebody else, that's bullshit, you are going to go through the same old shit with anybody."

"You have to adapt, you have to give and take and receive and take and all this kind of stuff. So you might as well just stay where you're at and try and figure it all out! Every time that has happened, when you go through a dry spell, and it happens in 22 years quite a bit. But when you come out the other side of it, man, that stuff just makes you better at it. It's just experience. I think people throw in the towel too early on in relationships."

Gibson remains professionally busy these days. He hopes to return to directing soon as long as it is something about which he is passionate. "When you're directing you have to take out two or three years of your life, as there is no time to do anything else. I am going to direct something soon which I'm not in."