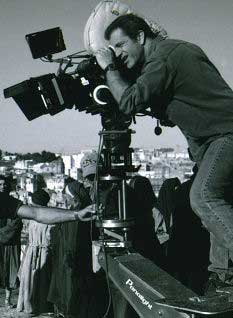 >EXCLUSIVE 1:1 Mel Gibson/Passion of the Christ Interview By Paul Fischer In Los Angeles.

26 years ago Paul Fischer and Mel Gibson got together for his first on-camera interview. Gibson was a star-on-the-rise, while his interviewer was just a mere university student. Some quarter of a century later, with Gibson's Passion of the Christ causing a tempest around the world, the Oscar-winning director agreed to get back together with Paul for one of the very few print interviews he agreed to, and his only non-US one-on-one. In this candid chat, Gibson discuses anti-Semitism, Jesus and the re-birth of his own Catholicism.

Mel Gibson was in the midst of autographing a collection of what he describes as 'picture books.' "Here take one", he says, unconcerned that our ten minute interview has been extended. Relaxed and in a cheerful mood, Gibson is fully aware that what began "as this tiny low-budget film" has segued into a veritable storm of controversy. Not one to generally shy away from the press, on this occasion, the Oscar-winning director and Hollywood star is not availing himself to the general press here, with the exception of some high-profile television and a few major print outlets. Quite frankly, he says, the film doesn't need it. "I don't like doing press and never have. You put up with it and if you need to do it to help something, then ok, you help make an awareness. But this doesn't NEED it, because it's got its own kind of life, so I don't have to do as much." Gibson says that doing little publicity is a good thing "because I'm an idiot when I open my mouth. I might as well shut up and go away." The director says it's therefore better to be prudent. "Besides, once you go out there, you end up engaging in the nasty kind of editorial name-calling, which I didn't want to do, because that's what this isn't about."

Gibson also insists that his reluctance to speak out has little to do with the conflagration of debate that has plagued The Passion of the Christ, from the outset. Gibson's problem, in adapting various Gospel and Biblical sources, was to draw a fine line between Biblical authenticity and personal belief. The film is a clearly a fusion of all of these elements, and Gibson is unapologetic but understands why his film has generated such ferocious debate. "Whenever you delve into politics, religion or spirituality, you're gonna touch some nerves, because not everyone's alike, and so I expected a LITTLE disturbance. It's gone beyond what I imagined it would," Gibson says, waving his arms about with a despaired expression on his face. "I thought we'd just get out there and preach to a few Christians, and maybe you'll make your investment back." Mel says he is astounded by the media response and widespread criticisms. "I honestly did NOT see the furore of this whole thing which is like a firestorm. Every time you open the newspaper it's a new thing, even the sports pages, so the awareness is through the roof. It had a lot of opposition even before we finished filming, with cannonballs flying over the bows, so it was prejudged and condemned and I just tried to stay out of that."

That includes the preposterous notion that both he and the movie are anti-Semitic. Gibson admits that all of the refuelled anti-Semitic discussion occasionally makes him feel despondent. "It's disappointing, because it's a little bit of a low blow. I heard a story once where Steven Spielberg was accused of anti-Semitism because he bought the rights to this book on Charles Lindbergh, which makes me think it's very loosely slapped around. Then the really funny thing was, this mantra about anti-Semitism keeps coming up and if anything gets said often enough it slowly becomes amalgamated into so many accepted truths, which is too bad." For Gibson, the anti-Semitic allegations have been part of this ongoing media campaign against the film. "Throughout the past year you'd pick up the newspaper and there'd be something or other, so it's given me a daily opportunity to practice tolerance", he says, smilingly. Since tolerance is a theme of the film - and of Catholicism- he refers to a scene in The Passion of the Christ which deftly sums up his feelings towards the animosity levelled at the movie, a scene he says, that wasn't there in the original script, from the Gospel's Luke. "It was that scene where he's on the Mount, saying that you have to love everybody including your enemies because if you just like people who like you, what good is that? There's no trial or sacrifice in that, so I put that in specifically because of my own experiences," Gibson admits.

Some of those experiences, Gibson says reflectively, were what brought him back to his own Catholicism. His devoutness and return to a renewed sense of spirituality came about around 12 years ago, during what he likes to call "a dark night of the soul", which he says is not uncommon for most of us. "Somewhere along the line you're going to hit the wall," Gibson explains. For him, it was at around age 34. "I realised then that I was completely and utterly spiritually bankrupt and there's a lot of misery in that." Gibson won't reveal specifically why his particular crisis of spirituality occurred when it did, though it wasn't necessarily anything to do with the film industry. "You don't have to be spiritually bankrupt because you're dealing with this industry, but it helps", he adds laughingly. "What makes one spiritually bankrupt is a lack of maintenance," he explains. He didn't start out that way, he adds, "having been a pretty happy-go-lucky kid. Eventually you ask yourself: What is this all about? Is it some kind of joke? Why am I tortured here like this, so it's like: I want to get out! At the same time, I don't like it here yet too scared to get out. You're paralysed in this middle, no-man's land of agony. It's that Hamlet question of: will I check out or will I stay" he admits. "At that point you really have to really begin to ask yourself some serious questions and to change things if you want some answers and any kind of peace at all." So at a low point in his life, Gibson recalls taking a hard look within to try and make an ATTEMPT at least to investigate his own Catholicism "because I didn't practice very well or execute what I professed to believe."

Why exactly Gibson turned his back on religion, was in part due to the kinds of temptations put in his way, as Hollywood adulation and stardom came knocking on his door. Gibson was already 31 at the time of the first Lethal Weapon, made 8 years after Australia embraced him as the young Mad Max. By the time he got to Hollywood, Gibson was certainly intoxicated by what he discovered over the rainbow. "I embraced the secularism of this industry and the peace that went with it", Gibson admits. "It was very seductive with a lot of things on offer, but no matter the excesses, the luxuries, it's just not enough and doesn't fill the void." So at the height of his international success, Gibson recalls, "I just got to that place where I questioned what it's all about. It was like turning into something like a circular torture-fest, just going round and round, which became an attempt by me to change the course of things, put a stop to it and take another route, find some answers and heal my wounds, because life is a scarring experience, as you know," he says, half-smilingly.

Out of this need to fill a spiritual void, Gibson turned to the Bible and the Gospels, and ultimately a need to re-tell one of the greatest passion plays in the history of Mankind. Thus The Passion of the Christ was born, and became an obsession for over a decade. Gibson doesn't respond directly when asked if the experience of the film finally filled that dark void. "Put it this way: I'm more fulfilled now than I was," adding that his remains a spiritual evolution. "I'm still really venal and have all the same flaws that I had as when I started. It's a long process, I'm just a work-in-progress and that's all there is too it. I may be flawed beyond belief, but I think I have a couple of clues as to what NOT to do anyway, because it's easy to grab at the nearest apparent solution."

For Gibson, his Passion of the Christ was at least a partial solution to his own sense of unfulfillment, and says the story of Jesus of Nazareth has something pertinent to say to a largely secular movie-going audience. "I think what I've attempted to do with the film is make it realistic and human. I think the first things that hit you are the human aspects of the story. What we all relate to is a human experience, because that's what we are, animals with a spirit. I think most people have a sense that they're something beyond all this," he says.

As for Mel, having put so much of himself in this Passion, one can only wonder, where he can go from this experience, as a filmmaker. "There are other things you can do, though they won't be as intense or as controversial as this, thank God," he adds with a grin. When his Passion of the Christ is finally behind him, he still longs to be behind the cameras. "I love the storytelling process of directing, and I think I know how to do it. My school was George Miller and Peter Weir, and I just sucked it up like a sponge."

As for his future as an actor, Gibson, who hid behind make up and a character in The Singing Detective, longs to escape the Mel Gibson persona, whatever that might be. "I think I'm tired of it as is everybody else. My Utopian ideal would be anonymity," but laughingly concedes that such obscurity "might happen in Peking because we all look alike to them." As for future acting gigs, he doesn't seem enthused on that front, "though there's always some bus you can catch, but it's not as exciting for me." He laughs when asked how much money he still gets offered for a new Lethal Weapon. "Ah, good question. I'm too old and I can't deal with the action stuff anymore." That also tends to rule out the much delayed Mad Max 4. "It's getting to the point where they'll start calling it Fat Max," but hopes, at the very least, to work again with Weir and Miller. "Those guys are masters so of course I'd love to work with them again. The trouble is, will they want me?"

As Gibson prepares to end his day of book-signings and the odd interview, he wistfully concludes, in this Beverly Hills hotel suite, that talking about those early days makes him miss his adopted country. "I have very fond memories of Australia but I do sneak back in every now and then without anybody knowing. I enjoy staying under the wire and just try to exist. I'll be back soon."