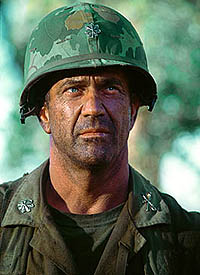 Some 20 years after Paul Fischer first interviewed Mel Gibson in Sydney for Gallipoli, the pair are back, this time discussing another lost cause Vietnam the setting for the gruelling "We Were Soldiers", which appropriately, opens on ANZAC Day. Some argue that this is Gibson's finest hour on the screen in over a decade. Paul Fischer reports from New York.

Mel Gibson arrived fashionably late for our interview. 22 years after we first met, Gibson has grown older gracefully. "God we were a couple of hairy-assed kids then, weren't we? I don't think I could talk then." Far less shy than he once was at the genesis of his career, Gibson still gets terrified of the process of doing publicity but these days he has a sense of humour. Once a heavy drinker, this father of 7 "doesn't touch the stuff" and cheerfully admits, that at a youthful 45, "I've cut back the cigarettes to 3 a day", he admits while coughing profusely.

The smoking aside, Gibson remains in peak physical condition, a necessity given the physicality of his latest role, that of a tough but compassionate career soldier who, in 1965, believed in the new Vietnam conflict and led a battalion into one of the most ferocious campaigns of recent military history. Gibson prepared for the film partly by hanging out with the real Hal Moore, "who really gave me every aspect of his experience which came naturally as we hung out for long enough. We went and visited every single grave of the boys that died and he would tell me all of this stuff about all these guys, talking about each one for a while before going on to the next one."

In addition Mel went to Boot Camp. "Boot Camp was great and very interesting. You got to use live rounds of ammunition and got to do a lot of crawling around with live rounds flying around you, so you really had to learn to keep your ass down everything down for that matter." Comparing "We Were Soldiers" to other Vietnam War films, Mel sees his as "less cynical. There's no drug-taking, baby-killing guys, but was true to the experiences of those guys who were there."

From his two-decade old "Gallipoli" to "We Were Soldiers", it appears that Mel has come full circle. Both are war films, both dealt with lost causes. Gibson admits that he is "drawn to those kinds of stories. I find them compelling; the whole idea of when your back's against the wall, where do you go and what have you got? I mean flesh and blood aren't simply enough. It requires more, as it certainly did for these guys, to persevere and to come out of it or not come out of it. I just find those interesting."

Gibson did not necessarily draw anything from himself to play Hal Moore, however the actor does admit that he borrowed heavily from his dad. "They're the same kind of guy, you know? He's a World War 2 vet and they have similar religious beliefs." Gibson recalls asking his father how he prepared for battle. "He had these particular prayers that you have on your person that are supposed to protect you from being hit and in fact guarantee victory. My dad carried the same prayer, and I don't know a lot of people who did that."

Both Moore and Mel's dad had that same spirit, the actor explained. "I told him what an idiot I felt walking around while everybody's crawling with lead flying. He said: 'That's what you do, forget about all that stuff, if your number's up it's up and you do what you have to do. He had like a shield around him."

Some might say that there is an irony to Gibson doing this film, as rumour had it, his family moved to Australia in order to escape the draft. Gibson dismisses that entire notion. "The fact is, it DID have the effect of postponing a draft for about a year", he insists. "I would still have been called up there, first by the United States, but if you didn't go back, you'd get drafted in Australia and you'd fight for THAT country as a permanent resident, so it bought you a year, but fortunately, the whole thing was over and done with by the time I was 16 years old."

Mel never went to the army, but instead headed off to drama school in Sydney, shared a flat with one Geoffrey Rush, and after a strong showing on stage, launched a film career that has made him one of Australia's and the world's favourite son. Gibson is busy as both actor and producer. He'll be seen in front of the cameras in M. Night Shyamalan' s "Signs" and as producer of the epic miniseries "Alexander the Great", part of which he will direct, and about which he is clearly passionate. "I studied him at school and found him to be one of the most fascinating, tragic, flawed, yet perfect in some ways, characters." Gibson is also directing a feature but won't elaborate "because these things get stolen too quickly because nobody has original ideas anymore". And as for the much-rumoured "Mad Max 4", Mel has no idea if he wants to reprise the character that turned him into a star. "Hey, they have to come up with something to show me, I guess." Mel DOES hope to return to Australia at some point to star in a film in his adoptive homeland. "Why not? We have a production company up and running there and we're going to get some stuff going."

For Mel Gibson, the opportunities are endless, and unlike his younger days, he says he has "more opportunities to map a career, because there's just a wider variety of choices you can make."
Mel Gibson/We Were Soldiers Interview by Paul Fischer in New York