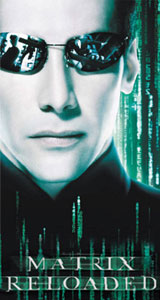 Keanu's Back in Black as the Matrix Reloads

Keanu Reeves has always had the reputation of revealing nothing to the press. Even those who work with him find him a tough nut to crack. His co-star in the Matrix films, Laurence Fishburne, laughingly admitted that he "can't tell you a fucking thing about Keanu. I've been working with him for five years. I don't know a fucking thing about him. All I can tell you about Keanu is that after I've spent that much time with him, I love the motherfucker, but I can't tell you a fucking thing about him." Keanu isn't about to make our lives any easier. Sitting on a studio soundstage and feeling more relaxed than usual, trying to get to know the real Keanu is simply a waste of energy. As good natured as he is, he is not prepared to divulge to the press what Fishburne was unable to uncover over five years, laughingly saying that "Oh yeah, you'll get that right here," when asked what the real Keanu is like. He relishes being an enigma and is happy to remain that way. "No, I want to sit here and cry and reveal my self to you all you fucking crazy guys." At least the now 38-year old star has managed to develop a sense of humour. When it comes to discussing the work, however, Reeves is more passionate, especially regarding the latest Matrix instalment. Clearly one of the year's most anticipated films, Matrix Reloaded again casts Reeves as Neo, aka Thomas Anderson, who, along with the rebel leaders, estimate that they have 72 hours until 250,000 probes discover Zion and destroy it and its inhabitants. During this, Neo must decide how he can save Trinity from a dark fate in his dreams. In part a Messianic fable, the original Matrix was not only a surprise hit when released in 1999, but uts influence on popular culture and cinema in general, remain extraordinary. Reeves is shy in defining the first Matrix's role in pop culture. "I hope that if people did respond to the first one, that they get something out of the second.", though he begrudgingly admits that "it certainly influenced a lot of things in cinema."

For Keanu, though an established success at the time of the original Matrix, he has gone through a lot in the last five years, both personally and professionally. More self-assured these days, he says that although he hasn't reflected specifically about how he might have changed since The Matrix, "I'll just say I'm older and older. I don't know. It's such a hard question. With any experience you have, you know more about yourself in terms of what goes on, in terms of being away from home for so long. Then, through that you discover what is important and there are things that inform you, including the friendships along the way." Including the shoot on the first Matrix, Reeves spent close to two years living in Sydney working on the trilogy, or "basically my whole 37th year working on the last Matrix films." The actor admits that "It was really hard to be away from friends and family that long." But at least it was in Sydney and he defines his experiences in the Australian city as being memorable. "I just loved the city. Great people, beautiful weather, beautiful architecturally and there's good cuisine there. In terms of working that way, and working in film, it doesn't happen all the time, if ever, that you have to apply yourself, go for that length of time on a project. And that's okay to me, especially when you love something and you get the extraordinariness of it. It is demanding in terms of missing your friends and family and also applying yourself to your work for that length of time."

It was worth it for Reeves, to suffer through the arduous training and physical pain, in order to help bring the vision of the Wachowski Brothers to the screen. Though he had wisely turned down another sequel [1997's Speed 2], Reeves had become wary about embarking on a project that was less than satisfying. The Matrix changed all of that. "I had also just done Chain Reaction, which was a really bad experience for me. I was tired and these projects were great scripts." And he got to finish the story, not because of the extra money and higher budgets, but because the actor felt they were important to tell. "If anything, the whole thing of The Matrix in terms of Neo is the birth of this man and this new life. Where does it develop, this relationship between the machines, man and the Matrix. In Reloaded some of the things that came up in The Matrix in terms of the digital entities and the Matrix being a place to escape to is also kind of cool."

While Reeves relishes being a part of the Wachowski Brothers vision, it remains a vision that the trilogy's directors themselves won't share with the press. Keanu is reluctant to further define their vision in their place, "because they don't want it defined. I don't think that's something they're interested in giving to anyone who watches the film." But unlike most Hollywood films, this pair of directors was at least able to realise a vision they had been harbouring for years prior to the first film. "I think there's always something you wish you could do more of, but we, the brothers, Warner Bros and all the producers were certainly gave a lot of resources to realizing these pictures, and it's great and I think you see it on the screen. There's a lot of movie up there." And Reeves did put more into this latest duo of films than ever before, in terms of training and keeping better in shape. "Some of the things I had to do were a little more advanced, such as some of the multi-fighting and the weapons." Keanu and his fellow cast members spent an initial 6 months in Los Angeles undergoing an intense training schedule, though the actor downplays the rigour of it all. "I just did it through basically practice and learning. Because of the experience of the first one, I had some body memory. I knew what I was going into and so I could pick up the choreography quicker and I knew where I was in wirework. Some of the stuff that was difficult in the first one was kinda like " I know how to do this. And then once I said that, our action choreographer Woo-ping Yuen would say well how about this? Or the brothers would say how about THIS? So then it was the back flips and the cartwheels." It wasn't easy, and even involved the actor occasionally immersing himself in a bathtub full of ice. "Sometimes what happens during the first four weeks of training, you're basically tearing micro-muscle tissue every day, so you get inflammation. I'm not 22 anymore and bouncing around, so ice and Epsom salts just help the recovery. Also, sometimes, because you're stretching two hours a day, kicking and stretching and kicking, you get all those tears and inflammation and I get cramps, so cold water tends to help alleviate that so you can sleep or walk upstairs."

It was clearly worth the pain, because at its core, this trilogy of films delves into greater questions than merely the physical. The Matrix redefined a genre by adding complexity, religious undertones and metaphysical symbolism to a futuristic Biblical tale. Even Keanu admits that in working on both Reloaded and November's Revolutions, he was mystified as to why certain scenes or moments were being executed. "but that's also part of the fun of it for me and the audience. Those questions you have are also strongly Neo's questions such as: Do you believe in fate? Why not? I'm not in control of my own life. That whole thing of asking those questions I think is Neo's journey and it was fun to ask them. I have a feeling about what Neil wants and the brothers had a feeling, so in the second one in an odd way I think they kind of invert what happened. In the first one, Thomas Anderson became Neo; his digital self became his real self and his fear of flying became him flying and there's a certain aspect in Reloaded where the hero gets inverted and we're back to Neo as Thomas Anderson. We see HIS fears, his personal kind of hopes and his vulnerabilities."

Almost like the actor himself, but he won't say so. The actor is currently shooting something quite different, a the new untitled romantic comedy from Nancy Meyers, co-starring the stellar likes of Jack Nicholson, Diane Keaton, Amanda Peet and Frances McDormand. "It'll be great to finally show off my funny side." And no, he is not in the running to play Superman, he says. "They've all died or have been injured", he says laughingly, referring to previous actors cast in the legendary role.." Like films that have Johnny in it," he concludes with a wry smile.

THE MATRIX RELOADED opens on May 15, MATRIX REVOLUTIONS opens November 5.