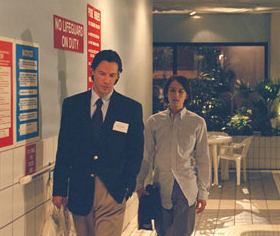 by Paul Fischer in Toronto.

One had the distinct impression that Keanu Reeves would rather be anywhere than talking to the press following the Toronto Film Festival screening of Thumbsucker, in which the actor plays a philosophical dentist. Often answering questions with an overt reluctance, Reeves does manage to maintain a certain sense of humour, bantering more with the films director, Mike Mills, than with reporters. Always and consistently managing to maintain a veneer when it comes to the press, the actor admits it was fun to play this character because its someone weve never seen from him, who was last on screen in Januarys Constantine. " I didnt hope to repeat myself." There is little chance of that occurring in this small, quirky comedy in which Reeves manages to remain in the background, before adding comic moments to a scene. Asked if it was refreshing or a release for him to be able to do a smaller film such as Thumbsucker as opposed to a big studio movie where theres so much more riding on him, the 41-year old actor offers an initial laugh. "Well if you put it that way...You know, in terms of scale - no. But I would just say that the material itself was not so much liberating but enjoyable, just dealing with a kind of naturalistic piece for a change."

Reeves says that at this point of his career, hes searching for as much variety as possible. "Ive been trying to work and working on Thumbsucker was great with a wonderful cast and a great role. I mean the working experience was great." Even in trying to get Keanu to discuss the parallels between his own anti-Hollywood journey, and the journeys traversed by the characters in Thumbsucker, was a challenge. "To go to work on something that one has a feeling for and believes in like I do and did for Thumsucker is a really good day and the story I got to tell as Perry Lyman, is kind of a tent pole that the film hangs on. Thats one of the better days that I get to do that as an artist."

Despite his varying choices, Reeves emphatically denies that he is becoming more selective these days, to a point, as he continues to embark on the next phase of his career. "Its just the kind of things that arise are limited. If I have the ability to decide what I get to do, great, but writers also have to write something and meet the directors, and producers have to want to do it."

Reeves next slate of films further proves his diversity. "I did a film with Richard Linklater which is called A Scanner Darkly, a Philip K. Dick adaptation. I did a film called The Lake House with Alejandro Agresti, a romance with Sandra Bullock." And despite recent claims on the internet, there is definitely no Constantine 2 in his future. "we didnt quite get to make it so if there is a sequel, it wont be from me."

At the time we spoke, the actor says that he wasnt booked for anything else. Finally asked if he has a career plan or flies by the seat of his pants, Reeves laughs. "Is there anything in between?" The actor does admit, though, that these are creatively rewarding times. "You know what? Ill just say that Im 41 now and I feel things differently. Its a cliché but I mean in the sense that theres a kind of enrichening, a deepening of good and bad."