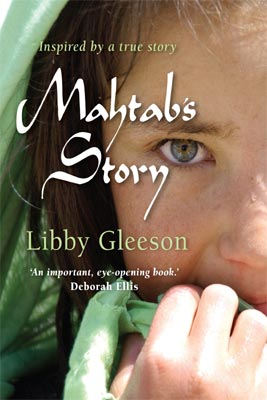 The vivid and compelling story of a young girl fleeing Afghanistan with her family and their journey to Australia. Inspired by a true story.

Mahtab was empty. She felt hungry...for water, for her father, for her grandmother, her aunts and uncles, for the trees in the back yard, the cabinet on the wall, the silver and glass objects so lovingly collected, for her mountains, the jagged peaks that cut the sky.

Her father was dead. She felt sure of it. She was just a speck of dirt on the floor, drifting through the gap between the boards, falling to the ground.

Mahtab and her family are forced to leave their home in Herat and journey secretly through the rocky mountains to Pakistan and from there to faraway Australia. Months go by, months of waiting, months of dread. Will they ever be reunited with their father, will they ever find a home?

This compelling novel by one of Australia's best-loved children's authors is based on the true story of one girl's voyage to Australia with her family.

Libby Gleeson AO is a popular and highly acclaimed writer who has published over twenty books for children and teenagers, including Eleanor, Elizabeth, I Am Susannah, Dodger, Love Me, Love Me Not and the Hannah series.She has been shortlisted for the CBCA Awards eight times and won the Award for Fiction for Younger Yeaders in 1997 with Hannah and the Tomorrow Room. The Great Bear (with Armin Greder) won the Bologna Ragazzi in 2000, the first time an Australian title has won this prestigious award. Libby has been a teacher and lecturer and is a regular contributor to academic courses and national conferences. She is actively involved in writers' organisations and chaired the Australian Society of Authors, 1999-2001. In 2007, Libby was awarded membership to the Order of Australia for her services to literature.