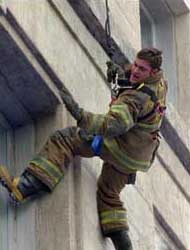 PHOENIX RISES FROM THE ASHES AND COMES UP SMILING.
Joaquin Phoenix/Ladder 49 Interview by Paul Fischer in Los Angeles.

Over the years interviewing Joaquin Phoenix, it takes a lot to truly instill a degree of passion when it comes to his movie career. Yet when talking about his starring role as a fire-fighter in Ladder 49, there is a glint in the actor's eye. He knew from the outset that he wanted to be a part of a film that he felt was paying a genuine homage to the fire-fighters. ""When I first heard about this movie, I was excited," he recalls," but I was also somewhat hesitant because I was worried that it might be a typical Hollywood action movie. In the first screenplay, I saved everyone on my own, I was the best husband and the best father - Linda and I always had five minutes together every morning before I left to fight fires. However, I was surprised to discover the later version was quite emotional. There is a need to tell stories about heroes, but I've always avoided the typical hero role because it is almost never true to life. I always feel that there are contrived subplots in order to give the protagonist a sense of goodness. That's not the case with this movie - it's about bonding. We've all heard about the special bond between firefighters, but until I read this script, I really didn't think about how deeply those bonds extend beyond the job."

Phoenix was so committed to this film that he joined the Baltimore Fire Department and trained far more arduously that any of his fellow cast members. ""I wanted to experience as much as I could about what real fire-fighters go through," he explains. "It was also a question of hitting the books, taking the tests and learning to deal with the public. I also went on ride alongs, visited the firemen's' bars and hung out with them. In addition, I wanted to know how it would feel to be a rookie and a ten year veteran - so I embraced the opportunity to attend the training academy with all these kids and see their excitement and eagerness about going into the fire department. Then I met with the year veterans and saw the effect of fire fighting on their bodies and psyche - everyone's a bit more cynical. That sparkle of excitement and adventure has somewhat dimmed."

Ladder 49 follows the daily lives of a group of Baltimore fire-fighters. Phoenix plays a fire-fighter who becomes trapped inside a blazing 20-story building. While trapped, he reflects on his life and how he came to be a fire-fighter while his mentor, Chief Kennedy (John Travolta), pools all resources to rescue him. For Phoenix, the key to Ladder 49 was keeping it real. "The training that we did really helped form the story that affected the script. It always had its heart and had some grit to it. But initially it was just a north-eastern city, it wasn't Baltimore, and each department is different and once we got to Baltimore and learned the specifics of the Baltimore city fire department that helped make some difference. But to be honest there's a writer named Terry George that came in and saved or lives. He came in and went on the ride alongs with me. He hung out with all the guys, went to the bars afterwards everything we did he hung out with us for a couple weeks." The Terry George in question was actually the writer of Jim Sheridan's In the Name of the Father, who was about to direct Hotel Rwanda, which happens to feature a cameo by Phoenix. "That's why I did Hotel Rwanda. We were in pre-production for this and I asked him what he was doing and he said Hotel Rwanda and we talked about it. It was a great to be a part of that film and [Don] Cheadle is phenomenal in it," Phoenix enthuses, who plays a cameraman in the harrowing drama.

Phoenix, who was scared of heights filming the fire pole sequences in Ladder, had to deal with a bigger fear shooting the Johnny Cash biopic Walk the Line, in which he stars as the country singer. "It's weird. Like what helps you shake a character is to have another character. I don't know how to explain really what goes on. I don't even understand it," he says. The actor concedes that playing Cash was perhaps his toughest challenge thus farm, "Just because there were so many things that were foreign to me, such as playing guitar and singing. All of which was a lot of work. Phoenix had to do his own singing in front of a multitude of extras, the shy actor recalls laughingly. "I don't like to talk in front of ten people much less to get up in front of 200."

Throughout his consistently successful career, Phoenix has managed to stay away from typical fare, Gladiator notwithstanding, and it's a career that continues to thrive and fulfill him. "I wanna do things that reflect our experiences and our realty, I guess and I don't know what it's from. But those are movies that I love. When I see Dog Day Afternoon, as much as it's this wild story it's grounded in reality. All those characters seem authentic and to me it's a whole new way to make movies. I'm sure at some point I'll make some ridiculous frivolous comedy for the hell of it- just to say I did! But the thing that moved me always is these things in real life."