One can tell that the last thing Joaquin Phoenix wants to do is talk to the press. Not one to suffer fools gladly, the casually attired and fiercely shy actor has become less patient with all that is synonymous with mainstream Hollywood, from the proverbial press junket, to Oscar talk, and trying to gently probe him into any kind of openness about anything personal, will result in the actors swift exodus. But even amidst his media reticence, lay an actor who has become more serious about his craft, as evidenced by what he went through playing the legendary Johnny Cash in Walk the Line. In contrast to last years Ray, however, director James Mangold was determined that Phoenixs iconic Cash would be a performance and not a carefully studied impression.

Phoenix says that while he made acting choices to cut back on his acting, that he always approached the work the same way. "In every movie Ive ever done I always do a bad impersonation of what my idea of what the character should be. For me I always initially tend to go over the top, pull back, step way back and then go forwards until I meet and find this level of comfort. But, you also rely heavily on a director and Jim is the one thats setting the tone of the piece. When I went into this I didnt know what he wanted: if its more of a dead-on impersonation then thats what Im going to go for but Jim didnt want that. But there were times where I went way too far, and before you find comfort you are going, Hello, hello, Im Johnny Cash. "

Phoenix, who seems to thrive on taking on difficult projects, admits that fear set in for this film only after it dawned on him that he was actually going to step into the iconic shoes of the man in black. "I mean at the beginning you just want to get the part so youre not going to admit to being anxious about it at all and so I must convince that I am the man for the job. Then as soon as you as get the job, the anxiety kind of sets in and, what have I done?" Phoenix, says, laughingly. "I met with Jim and then I think it was like a year-and-a-half before we started shooting as the film wasnt getting green-lit, and I made three other movies in between. So it was always kind of in the back but I didnt think it was going to happen and, I didnt think about it that much because I had to focus on these other films. Then I got the call from Jim saying, look, were happening, and what do you want to do? I said I want to go out and start working with T-Bone in L.A. rather than sit in New York and think about it. So I went out to L.A. and went, oh, fuck. Then finally the kind of enormity of it really settled in and that was tough." 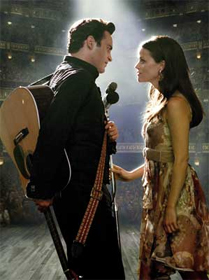 At the beginning, neither he nor his co-star Reese Witherspoon had any idea that theyd be required to also do their own singing. So playing both a legend and sing his classic songs proved equally daunting for this Oscar nominee. "In most characters theres something in which you can seek refuge and kind of go: okay, well I got that, and then I can build off from that. Here I didnt know where to turn. I mean, every time I turn around to kind of settle and feel a certain level of comfort with some part of the character, the kind ground fell from under me." Yet, he adds, its not fear that motivates him. "At times theres healthy fear that motivates you and then theres debilitating fear, and there were certainly times where I had debilitating fear on this when I thought Im not going to put myself out there like that."

Yet Phoenix says that he finally found himself in the character "through the music, and that was what we worked on first. if I had to go in and start rehearsals, working on scenes and kind of jump in and try and find his speaking voice, I never could have done it. But working on the music first, finding the level of comfort with the guitar as my first step, and then through the singing finding his speaking voice, was the most important thing."

While Phoenix is more than happy to discuss his process, his comfort zone starts to dissipate when asking him to draw parallels between Cashs own troubled youth and himself, simply admitting that "everybody can relate to Cash in some way. Ive got to start doing that when I work on a part and think of how I relate to him so I can answers these kinds of questions I dont see how thats really beneficial, because for me, the writing is everything. Ive always had that experience where theres something in the script that kind of triggers a thought or a feeling, and thats really what, I think, what I draw from. But I dont see the benefit in sharing a personal experience."

The moment one drifts off course with the actor, Phoenix sees his escape route and begins to make an expedient exit, but first concluding that having been a fireman and now a country music legend, he nothing left to give, just for the moment

"I don't want to experience anything or talk to anybody. I've done enough work and I can't wait to do absolutely nothing." It appears he is a man of his word! 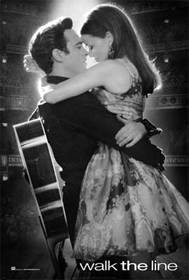