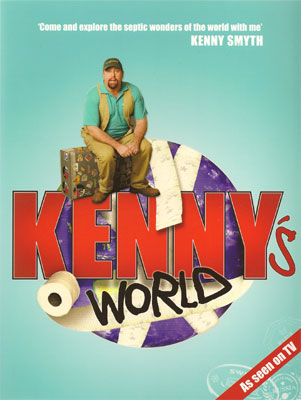 It's a dirty, smelly job, but someone's gotta do it... And nobody does it better than Australia's favourite portaloo plumber and part-time philosopher: Kenny Smyth.

Kenny is the Dalai Lama of waste management. He's a big-hearted optimist with endless charm, wit to burn and an encyclopedic knowledge of all things flushable. All of which makes him the perfect host for Kenny's World- the international travel show with a difference.

Kenny's World is a nine part series screened by Channel 10 in September this year. It's a kind of sightseeing tour you won't find in any travel guide. From the machine that makes its own excrement in Luxembourg to the toilet temple in Japan, Kenny lifts the lid on bizarre, intriguing and often downrightridicuous examples of toilet technology and the people connected to them.

But Kenny's World is more than a parade of peculiar privies. It's also a refreshing down-to-earth glimpse into real people's lives, as seen through the sympathetic eyes of Kenny. His travels reveal how much human beings have in common throughout the world- no matt what they shovel for a living.

Kenny Smyth hails from Melbourne's western suburbs. He works for Splashdown, which makes him a poop technician, a dunny doctor or a glorified turd burglar depending on who you're taking too. He's not in it for the glory, but he admits that his business is not likely to dry up overnight. He has a son, Jesse, who is his world and his best mate: "We carry on like a couple of snakes at a hole punch convention." He also has a cantankerous father, an obnoxious older brother and a hostile ex-wife. Fortunately he has recently met the lovely Jackie, a flight attendant who "keeps my head in the clouds and my heart on my sleeve." No matter what toxic shock life has in store for him, the affable Kenny always emerges smelling of roses.