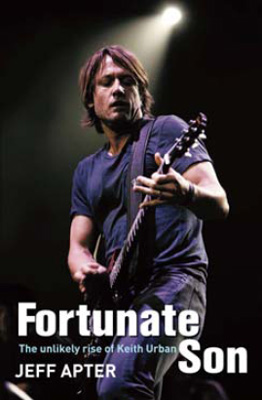 Suburban loner, gifted guitarist, drug addict, planinum-plated superstar: Keith Urban has squeezed a lot of living into his 40 years. He now ranks with Kylie Minogue, INXS, Silverchair and Savage Garden as one of the countrys biggest musical exports of the past 20 years.

Fortunate Son, the first biography of this country hero, tells the unlikely storyof how Urban - who was born in New Zealand in 1967 but raised inQueensland - followed and eventually fulfilled his dream by succeeding inthe toughest country music market on the planet - Nashville.

In an age when songwriters generate most of the hit songs recorded in MusicCity, Urban is an anomaly: actually writing, or at least co-writing, most of hismaterial. Keith Urbans success is undeniable: to date hes sold more thanfive million albums, has scored five US Number One singles and typically sellsout his stadium-sized shows in minutes.

His very public relationship with our Nicole Kidman, whom he married in an A-list affair in June 2006,has earned Urban a totally new audience, as gossip mags across the planet chart the Kurbans everymove, and most recently the pregnancy and birth of their long-wished-for child, Sunday Rose.

Fearfully frank and authoritative, and based upon extensive interviews with friends, foes and Urbaninsiders, Fortunate Son reveals how Keith Urban lived out his childhood dream - and the price hes had topay to reach the top of the music business.

Jeff Apter has written biographies of the bands Silverchair and the Red Hot Chili Peppers and the singerJeff Buckley. He also co-wrote Slats: The Michael Slater Story. He spent five years as the Music Editor ofRolling Stone and contributes to Vogue, GQ and The Sydney Morning Herald.

Interview on Fortunate Son, The unlikely rise of Keith Urban

Why did you decide to write the book, Fortunate Son. (The Keith Urban Biography)?

I was very surprised that not many Australians really knew how successful Urban was in America, where he's definitely in the music A league - yes, even before he married what's her name. I wanted to set that record straight, because he's one of our biggest musical exports of the past 20 years, on a par with Kylie, INXS and Savage Garden. I also wanted to document how he got to the top and what he had to sacrifice in order to become such a big star.


What is hard-hitting about this biography?

Most readers and critics have been impressed that I haven't attempted to go 'soft' when it comes to documenting Keith's rise. I genuinely believe I've written an honest (and hopefully gripping) portrait of a guy who has incredible ambition and drive. Many people know of his addiction problems, but few really know how ruthless he could be when it comes to his career. As I was told by one insider - who Keith sacked after they worked together for 20 years -Keith's a very warm and likeable human being, 'but if you get in the way of his career he'll banish you from his life in a heartbeat.'


Will the biography surprise readers?

Absolutely - and this goes back to your first question. I don't think many people outside of those in the Oz country music industry would know that he draws 20,000 or more people each night to his shows, and that he's sold almost 10 million records, or that his fanbase would walk through fire for a moment with 'our Keith'. He's also very highly rated within music circles; that's why he turns up on such events as the Grammys and Live8. Many still think of him as the guitarist from Caboolture with the dodgy mullet.


Was it hard to write this biography because Keith Urban has been through many stages over a short space of time?

No, quite the reverse; it gave me some great material to work with. Like a good fictional character, he has kept on changing, adapting, trying to find a way to fit into the music community that he so craved becoming a part of. That has affected his look, his musical stance and his attitude towards such things as politics (he's extremely apolitical, not wanting to offend). He's constantly evolving - or devolving, in some cases. He's a very real, flawed, charismatic, interesting guy.


How long did it take for you to write this biography?

I first met Keith in Nashville in 1996, and was immediately interested in his story: why was he in the States? How was he faring there? Would he succeed? So the idea for the book was in existence since then. But as far as the actual writing, researching and interviewing was concerned, it took the best part of 2008 to piece together Fortunate Son. It was one of the more enjoyable writing processes I've been through, too: I really wanted to chronicle this man's remarkable life story, which has enough peaks and troughs for a dozen people.


Have you collated new information that will show Urban in a different light?

Again referring to a previous question, his steely determination and ruthlessness when it comes to his career may surprise people who know him simply as the nice bloke with the stubble who's married to 'our Nicole'. I believe Keith is a genuinely decent person, but he has learned how to separate the personal and the professional: he's cast enough 'true believers' by the wayside, especially over the past 6 or 7 years, to prove that he should not be crossed. The depths of his crack cocaine addiction may also surprise people, and how that was driven by his early career failure. He admitted that during his darkest days he was quite willing to die; he felt that he was a failure, utterly worthless. Rehab, good fortune, a very marketable talent and some powerful industry connections changed all that. Marriage and fatherhood didn't hurt, either.


How do you think Keith will respond to this biography?

Judging from the response to the book by those who know Keith very well - or knew him well, in some cases - I firmly believe that he'd accept it as an accurate and crap-free telling of his life. He may not be thrilled by some of the revelations made in the book, but he would accept them as the truth.