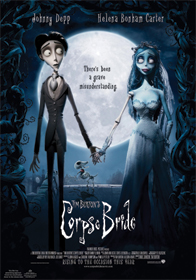 Sporting a tanned hat and thin beard, Johnny Depp was in the thick of Toronto's annual film festival happy to talk about his participation in yet another Tim Burton film, Corpse Bride. Making his initial foray into the world of animation as a cowardly groom-to-be who inadvertently finds himself betrothed to a corpse bride in the stop motion romantic fantasy, Depp says that doing an animated film " was something I kind of always wanted to do, especially since having my first child," Depp explains smilingly. "Ive been watching nothing but animated films now, so Ive really developed a respect and love for them. But more than anything, what drew me to this was Tim. We were just commencing Charlie and the Chocolate Factory and he said, Hey, Ive got this other thing, Corpse Bride, maybe take a look at it. So I read it and loved it, but it somehow didnt occur to me that we were going to be doing it at the same time. I thought it was going to be like months down the road so I would have some time later to prepare for the character." You could imagine the surprise of this normally prepared actor when, as he was very focused on Wonka, "Tim arrives on set and says, Hey, you know, maybe tonight well go and record some of Corpse Bride. I was like sure, course we can. I have no character. I didnt know what the guy was going to sound like or anything, but good fun though."

With two children, a six year old daughter and a three year old boy, the actor isn't quite sure whether they prefer their dad as an animated character or pirate. "My daughter is quite calm, ladylike and princessy, so she can sit there and watch a movie and not get real antsy. While my boy will watch for about three and a half seconds, then sprint as fast as he can across the room to go and break something. With this film, we watched Corpse Bride together and my boy sat on my lap and watched the entire film, just didnt move, was riveted and just loved it. Now that says a lot. I think this movie pretty full,"

While Depp is one of the few movie stars in Hollywood that passes as both a major leading man and character actor, he clearly ignores the notion of celebrity, taking his job of actor more seriously than most. Even on a film such as Corpse Bride, Depp had to literally set about finding the character, as he explains. "I think with any character, it all comes from some place of truth within you and then I don't know, which is weird. When I read a script, I get these sort of images and ideas come to me. Then sometimes the image of people come to me, like with Sleepy Hollow I kept seeing a Roddy McDowell/Angela Lansbury kind of thing so that became the inspiration. Captain Jack, Keith became the inspiration because I started thinking of pirates as rock stars of the time, the idea that their legend arrived months, maybe years before they did. So you just start taking little titbits of things and storing them up to use later." Depp adds that for better or worse, he's a keen observer of human behaviour. "One of the primary responsibilities and luxuries of an actor is to is the art of observation, being able to watch people and watch their behaviour. Now that is fascinating, because people are really nuts," says Depp laughingly. "Over the years, Ive really enjoyed just stealing little bits from people, incorporating them into characters."

It seems that Depp is at his most creative when working with pal Tim Burton. the two have evolved since their first pairing on Edward Scissorhands and it's clearly a relationship the actor cherishes. "I just think hes a genius and thats not a word that you can throw around very easily. I think Tim is so special and unique and our working relationship is, as you can imagine, weird, because there is a sort of emotional shorthand there and some kind of connection that I don't know how to explain. But most of the time, at least for me, all Im trying to do is make him laugh. Even in the scene, you can have all these motivations and objectives as an actor but hen when I get in the ring, it basically all goes out the window and Im just trying to make Tim laugh. I just want to see in my peripheral vision his sort of hunched over giggle where hes trying not to make noise."

Asked if the actor might be someones inspiration someday, Depp pauses and smiles. "Thats dangerous territory. I don't know that Im in a position to inspire anyone."

Depp is now back at work on both Pirates movies and is philosophical about the process of bringing his Captain Jack back not once but twice. "It occurs to me that Jack Sparrow can be funny, so Im going to try that this time and Im just going to try and be funny. Selfishly, the whole idea of sequels and stuff like that, are a very odd notion because I never quite understood the idea of doing sequels until as an actor you think: Ive played this character for months and months and I really got to know and love the guy, Then the clock starts ticking and you know the end is coming and you go: Jesus, Ill never see him again. Ill never see him, Ill never feel this again. So you start to get depressed and with Jack Sparrow, I had the sneaking suspicion that I might see him again. So Im saying selfishly, I was so excited to come back and do two and three because I just wanted to meet up with him again."

And Depp also hopes to return to the ill fated Don Quixote project abandoned by Terry Gilliam. "Id love to. If theres any way to avoid the curse, that would be better. Every time I see Terry he threatens to. Id love to do the film if at all possible and I stress that if at all possible, because it was going to be good. That was the thing we all felt and was really sad. It was going to be really good. It was like the best of Terry Gilliam and I felt really good about my character. The good news is, if he wants to go back and do that, I know the character so I have less to do."

Depp is that unique Hollywood animal: a bona fide movie star and an acclaimed actor. And now he's as much a blockbuster star these days the happy-go-lucky and pragmatic actor seems to take the added responsibility seriously. "Heres an oxymoron for you: it hasnt changed my work ethic or my approach to the work. Ive been very, very lucky in my life that I have worn many hats, literally and Id love to show them all to you. Ive done everything from selling ink pens over the telephone to screen printed T-shirts, worked construction, was a musician for a number of years and a busboy. Ive done a lot of different things and Ive had a great deal of luck in this business, so Im somewhat together enough to know that if the ride is going smooth, fun and well and everything is peachy keen this week, then all that could evaporate next week and then Im once again that weird guy that does art films, which is okay. So I've always said Ive never had any allergy to the idea of commercial success. It was just how you got there that was important."