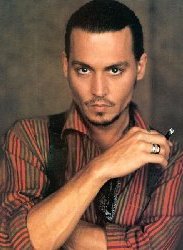 FROM HELL AND BACK

Johnny Depp was looking calmly sombre when we met. Just a few hours after news reports on the first American bombing campaign in Afghanistan, a serene Depp questioned the validity of doing press for his latest film, 'From Hell'. "Do you find it strange to be here, talking about this?" he quietly questions.


Impeccably attired in a dark brown pin strip suit and fiery red shirt, Depp is rolling a cigarette while considering his own response. Often publicity shy at best, Depp admits to being "confused" about being in Los Angeles doing interviews for a movie. "It just seems very odd to me to be talking about movies in the wake of everything that's happening and everything that's GOING to happen." Yet on the other hand, while the world remains in turmoil, Depp also agrees that it remains important to maintain the old 'show must go on' front. "I certainly think it is important for all of us to be marching forward, but I still find it difficult to talk seriously about films even if it's something that I'm proud of, such as "From Hell."

In "From Hell", set in 1888 London, Depp plays an opium-addicted police inspector on the trail of the vicious Jack the Ripper. Asked if it is the right kind of film to be released at this point in time, Depp is circumspect. "I think that movies, if they do anything at all, provide a degree of escape from reality for a couple of hours. I'm not so sure that this is the one that people will necessarily want to escape to. But it is, after all, only a movie."

Depp feels at home playing this nineteenth century character. No stranger to appearing in period films, one of his attractions for this project was its historical setting. "I have a great affinity with the past", the actor explains. "I'm a history freak and always wanted to travel back in time, so period films give me that opportunity." He adds that "walking onto the Whitechapel set they built in Prague was about the closest opportunity yet for me to step back in time." "From Hell", which was directed by the very urban Hughes Brothers, offers yet another hypothesis on the identity of Jack the Ripper. Depp admits that "there have been so many solid Ripper theories, but I think this one was one of the more intelligent and well executed theories."

In a career spanning close to 20 years, Depp has consistently defined himself by his choice of diverse characters. Making his screen debut in the original "Nightmare on Elm Street" and achieving initial fame on television's "21 Jump Street", Depp's gallery of screen roles range from the title character in Tim Burton's whimsical "Edward Scissorhands", through to diverse characters in the likes of "Cry-Baby", "Ed Wood", "Dead Man", "Fear and Loathing in Las Vegas", "Sleepy Hollow", and more recently, in "Before Night Falls", "Chocolat" and "Blow". While he gently scoffs at being labelled an A-list Hollywood star, there is no denying that there is no such thing as a 'Johnny Depp movie', and the actor couldn't be happier with the definition, despite likely pressure from his agents for him to go more mainstream. "I'm sure it would have made their job a whole lot easier had I done some of the things that were proposed to me over the years," he says smilingly. "But I got very lucky when I met my agent [Tracey Jacobs] of 14 years when some of the top brass at some of the agencies were pretty vocal at some of the choices I'd made and Tracey supported me all the way down the road."

Depp has also been lucky in his private life. The actor divides time between homes in Los Angeles and France, where he lives with long-time girlfriend, actress Vanessa Paradis, and one-year old daughter Lily-Rose. Fatherhood, gushes Depp, has certainly changed his life. "When I saw my daughter being born, it was the first really totally selfless moment I'd had," he recalls. "I want 100 more children. If Vanessa is willing, I'll certainly try." The 37-year old Depp remains genuinely happy. "I had always wanted kids, but it didn't seem to be working out for me. My siblings already had children and I was in my thirties with no real prospects of it happening for me."

Depp admits that his criteria for choosing roles haven't necessarily changed since becoming a dad. "There are two ways I look at it. On the one hand, I DO select roles differently because I think I started making choices all those years ago with regard to what I might be able to leave for my kids when the day comes that I don't breathe anymore. I started making films that my kids would one day want to be proud of." But at the same time, Depp adds, "there's not one particular area that I'm staying in, like action movies, so I think it's important for an actor to explore all kinds of areas."

Yet as happy as he is, living in Europe doesn't make him feel safer, given recent events. "While generations before me certainly remember where they were when Kennedy was shot, MY generation will remember exactly where they were on September 11." Depp recalls having been in Venice, where he had been promoting "From Hell" at the Venice Film Festival. "I was on the phone to my sister, discussing flight arrangements for the next day, when she said that a plane had just gone into the World Trade Centre." Depp's initial reaction, he recalls quietly, "was one of such utter devastation and confusion. But then I suddenly felt oddly patriotic, felt immediately American, and wanted to be home on American soil. It was very strange not being able to GET home."

While in Los Angeles promoting "From Hell", his girlfriend and daughter are back in France "because to be honest, I couldn't bring myself to put them on an aeroplane." He is, of course, anxious to join them. "I want to be with them every second of the day." Asked how hard it is to bring up in a child in these uncertain times, Depp pauses. "She's the purest angel that I've ever seen in my life, so when you are glued to the television set trying to make sense of all of this information, and then you look at this pure little being, as much as you can feel what's happening right now and the victims of this tragedy, I can't help but feel about the future of my baby, for all of our children and what that's going to be like for them if this war lasts for God knows how long." No wonder it is difficult to remain optimistic, he ponders. "I'm more a realist than a pessimist. All you can do is keep going and keep moving forward, hope for the best, stay with your family and be strong."