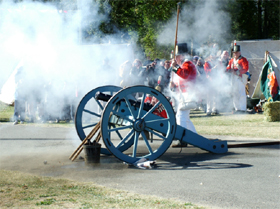 The future of Trans Tasman rivalry between Australia and New Zealand is Medieval when, on April 18, a team of four Knights from New Zealand fly in to Sydney to take on an Australian team, headed by the current World Champion, Rod Walker.

The New Zealand team, comprising of Grahame Nixon, Simon Tennant, Jezz Smith and Grant Kerns will set up camp in Lithgow, in preparation for this year's St George's Day Australasian World Jousting Championship, which in conjunction with Ironfest, will be held over the weekend of April 22 & 23.

Following, a 'Knight's Tale' style parade down the Main Street of Lithgow (12 noon, Thurs, April 20), comprising of all eight contestants fully kitted out in medieval armour and horse and accompanied by their squires (but without Heath Ledger), the teams will complete their preparations to 'do battle' on the field at the Lithgow Showground.

The Australian team, headed by Rod Walker, and comprising of Michelle Walker, Justin Holland and Luke Binks must be considered the favourites given the home ground, but also, own horse advantage.

There will be two days of competition, at the end of which one team will be judged the winning team. (See Ironfest website for program details.)

(Generally speaking the judging criteria is quite complex, based on a traditional set of medieval rules. Suffice it to say; the team that knocks the other team off the back of the horse, is the winner!)

One contestant from that team will then be declared the overall Tournament Champion, and 'The Australasian World Jousting Champion', for 2006.